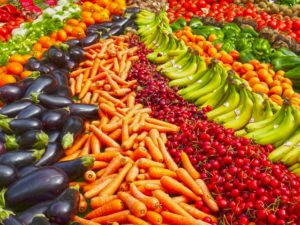 Did you know that some of the nuts, fruits and vegetables we consume are not natural? Yes, you got that right! Some are indeed man-made.

These are man-made hybrids created through a selective breeding process in which only favourable plants with good characteristics are replanted to reproduce and become food. But in some instances, insects like bees, are responsible for creating the hybrids through a process called cross-pollination.

Let’s take a look at the most common man-made hybrids found around today’s markets:

When and where bananas came from was the subject of an analysis of the evolution of this famous fruit. The study evaluated different findings to seek the truth.

Long ago, wild bananas (the musa balbisiana) had large hard seeds. The tree didn’t bear many fruits. Today’s bananas are said to have evolved from the wild varieties — the Musa balbisiana and the Musa acuminata, that had small and okra-like pods. These were used in breeding seedless bananas.

Did you know that the corn that we have all summer long is actually a hybrid? Where it came from is unknown to many of us as shockingly, the biological origins of this food remains a mystery.

Some experts linked corn’s existence to teosinte, a Mexican grass, which has skinny ears and few dozens of kernels inside its casing. Others regard it as a relative of rice, not maize.

A Cornell University graduate, George W. Beadle, discovered that teosinte kernels pop. And the plant and maize appear to be having the same chromosomes. He later concluded that these plants were related and won the Nobel Prize for his “Genetics” work.

Watermelons are one of the oldest foods on earth, having been around for over a millennium. In fact, archaeologists have found watermelon seeds at a 5000-year old Libya settlement. Watermelon paintings and seeds have also been found in Egyptian tombs that are at least 4,000 years old. One of those tombs was of the famous King Tut.

In the past, watermelons used to have a more pale colour and more seeds. It turns out that watermelons didn’t have the red flesh they have now. The amount of flesh was also comparatively less.

This fruit’s ancestors look pretty much the same as what we can now find in groceries and supermarkets. But the tastes are different.

A native and wild apple found in Tajikistan, China, Kyrgyzstan, Kazakhstan and Uzbekistan known as the Malus sieversii, is one of the ancestors of today’s apple, according to the Global Trees Campaign.

Today, we can find so many varieties of this nutritious fruit, loaded with antioxidants, vitamins, minerals and fibre. Some consider this fruit as a vegetable, and it is one of the oldest veggies around.

In fact, a herbarium sheet circa 1542-1544 shows the oldest conserved tomatoes of Europe. Long ago, today’s tomato’s ancestors had small yellow or green fruit. The Aztecs often used them in cooking.

Eventually, explorers brought it to Italy and Spain. However, it was thought to be poison apple in the 1700s because people thought the Aristocrats died after consuming it. It turned out later that they died due to lead poisoning that happened when the lead in the fruit leached from the pewter plates.

Carrots have been around for quite a while and they are loved by not only just rabbits, but by children and adults as well. They were easy to grow even earlier, but they used to look quite different than what’s available in the market now.

Did you know that they used to be purple or off-white instead of the bright orange as they are today? They were very thin as well.

According to the virtual World Carrot Museum, Romans and Greeks grew the vegetables for food.

Today’s peanuts are a cross between its ancestors — the Arachis duranensis (found in the Andean Valleys) and the Arachis ipaensis (native to Bolivia). As the plants are so far apart in the physical realm, they couldn’t have crossbred naturally.

Later, researchers discovered that early settlers in South America brought the Arachis duranensis from the valleys when they travelled to modern Bolivia some 10,000 years ago. But back then, the settlers didn’t know the new crop’s potential. It was a good thing that the bees did the cross-pollination between the two plants — resulting in the modern food, peanut.

Today’s strawberries were first seen in France in the 18th century. But for this plant, the hybridisation programme started much earlier. French botanists began planting strawberries in the 1300s as soon as they realised that wild strawberries could reproduce through cloning.

Shockingly, some didn’t produce fruits at all, while 50% of the ones that did could not be closed and stopped making fruits in the next few years.

While the French were able to create wild strawberries, which were up to 20 times their normal size, they were still tiny.

Do you love the rich and deep purple colour of eggplants? We all do! But did you know that this veggie used to have several shades — purple, azure and even yellow?

The vegetable got its name because it used to be round and white, hence similar to an ‘egg.’ Some of them even had spines.

While there are many varieties available now, all of them can trace their roots to the hybrid and man-made variety which resulted from the crossing of pomelo with mandarin.

While some people believe that the orange is the ancestor of the mandarin, it is actually the other way around.

And even if the history of the orange is unclear, many believed that the first one grew in Southern China.

[Tidbit: A tangerine is unlike the orange and not considered as one because it evolved from the mandarin, only not from the pomelo.]

Which amongst these man-made fruits, vegetables and nuts are your favourites?

Reduce your Foodprint with Sustainable Cooking

IKEA will make the turkey for Thanksgiving and...

Here are 4 Reasons to Visit The London...

Take a Tour Around Time Out Market...

IS A PLANT-BASED DIET THE WAY TO...