A ROYAL MASTERPIECE TO STAR AT SOTHEBY’S THIS OCTOBER

The Shahnameh – or 'Book of Kings' – made for Shah Tahmasp of Persia (r.1524-76) is one of the finest illustrated manuscripts in existence.

The monumental tome covers the greatest epic of Persian literature, containing 50,000 rhyming couplets and tells the history of all Persia's rulers from the country's ancient mythical beginnings. The most lavishly illustrated copy of the 10th-century poem in existence, it was illustrated over two decades from 1520 to 1540 by the greatest artists in the royal atelier. It is thought that no other Persian work of art, save architecture, has involved such enormous expense or taken so much artists' time. The result was an unparalleled achievement and stands as one of the greatest works of art in the world.

This October, a magnificent folio from the Shah Tahmasp Shahnameh will make a rare appearance at auction as part of Sotheby's bi-annual Arts of the Islamic World & India auction, offered with an estimate of £4,000,000 – 6,000,000. The scene depicts the great hero Rustam recovering his horse Rakhsh – named the Persian word for lightning – two of the main figures throughout the tale.

The manuscript boasts a glittering provenance from the moment it was commissioned, to the present day. It was commissioned by one emperor, Shah Ismail (the first of the Safavids), completed by another, his son and successor Shah Tahmasp, gifted to a third, Sultan Selim II of the Ottoman Empire, and was later owned by one of the great bibliophilic families of the modern era, the Barons de Rothschild, whose collections included such masterpieces as the Belles Heures of the Duc de Berry and the Hours of Catherine of Cleves. Today, folios from the Shahnameh are treasured in museum collections internationally, including New York's Metropolitan Museum of Art; The Smithsonian Institution in Washington D.C; The Aga Khan Museum, Toronto; The David Collection, Copenhagen; The Nasser D. Khalili Collection of Islamic Art, London; The Museum of Islamic Art, Doha, and The Museum of Contemporary Art, Tehran. 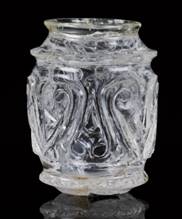 Rock crystal, from which this flask was carved, is the purest form of quartz, and is renowned for both its hardness and clarity and is associated with air and water in philosophy and poetry. Produced during the heyday of Fatimid power, it is thought that ladies of the harem used these pieces for cosmetic purposes. 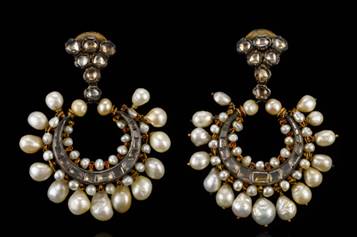 These magnificent diamond earrings belong to a group of jewellery that was from the collection of the Nizam of Hyderabad, a dynasty of wealthy rulers known for their spectacular collection of jewels. The family had inherited gemstones from the earlier rulers of Deccan, who oversaw the famous Golconda mines – the world's only supplier of diamonds for centuries. They were last exhibited at The Metropolitan Museum of Art, New York's exhibition on the Sultans of Deccan India, in 2015.

This exquisite dagger, with its distinctive floral gem-set decoration, is most likely to have been produced in the Deccan or for a Deccani patron. The dark, emerald-coloured green glass inlaid with rubies and diamonds relates closely to the enamelled objects produced in Hyderabad during the latter half of the eighteenth century. 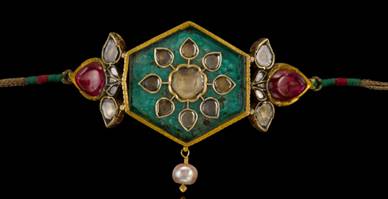 When the Maharajah and his eldest sons died, Jindan Kaur's son Duleep took to the throne aged only five years old, with her as regent. After the first Anglo-Sikh war, the British retained Duleep as ruler but imprisoned Jindan Kaur, until she managed to escape disguised as a servant. Jindan Kaur sought refuge in Nepal and was eventually reunited with her son in 1861, who negotiated the return of her jewels, comprising over six hundred pieces.

The bazuband was acquired by John Brogden, the renowned London jeweller in the Victorian era, who showcased a range of jewellery at the Great Exhibition in 1851. 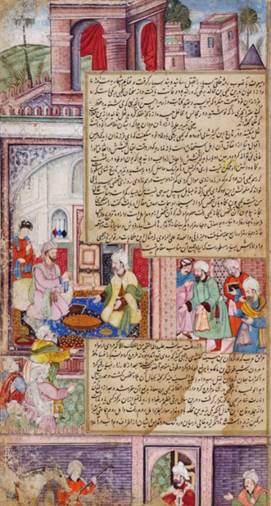 The "History of a Thousand Years" was written for the Mughal Emperor Akbar between 1582-88, and recounts the ruling Caliphs through the Islamic period. This work is a rare folio, thought to be the last remaining in private hands, with only approximately eighteen or so others known to survive. Many are in museum collections, including The Museum of Fine Arts Boston, The Freer|Sackler Gallery, Washington D.C., The British Museum, The Los Angeles County Museum of Art, The San Diego Museum of Art and The National Museum New Delhi.

Incorporating two tones of gold in the opening illumination in contrast with a dazzling ultramarine lapis lazuli, this Qur'an, in superb condition, exemplifies the height of Safavid illumination. The ambitious decorative scheme and the overriding quality points to an illustrious patron. 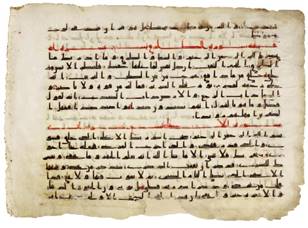 This monumental folio originates from one of the largest Kufic Qur'ans of the early Islamic period, the scale suggesting a patron of great wealth and importance. The simplistic ornamentation that gives focus to the text is typical of the earliest period of Kufic Qur'ans in the 8th century.

The Collection of Betsy Salinger

The sale offers 15 Indian paintings from the collection of Betsy Salinger. The selection, not seen on the market in decades, crosses centuries, spanning outstanding Mughal folios to the distinctive styles of the lyrical Pahari schools, the dynamic Rajasthani schools to the masterful Mughal and Deccani schools and court ateliers.

Among the highlights is The Pilgrimage of Maharana Sangram Singh of Mewar, circa 1720-30 (est. £80,000-120,000). Commemorating a historic royal pilgrimage to the temple and shrines of Srinathji in Nathdwara, it is impressive both for its large-scale and the complexity of the composition. Also from the collection is An Encampment of Ascetics, circa 1680 (est. £60,000-80,000), a Deccani painting depicting a group of forty figures in the wilderness, all in various states of intoxication.

THREE EASY STEPS TO GROW YOUR BUSINESS WITH...

Learn how to gain citizenship in various countries...

SHAQUILLE O’NEAL IS THE NEW FACE OF ABU...