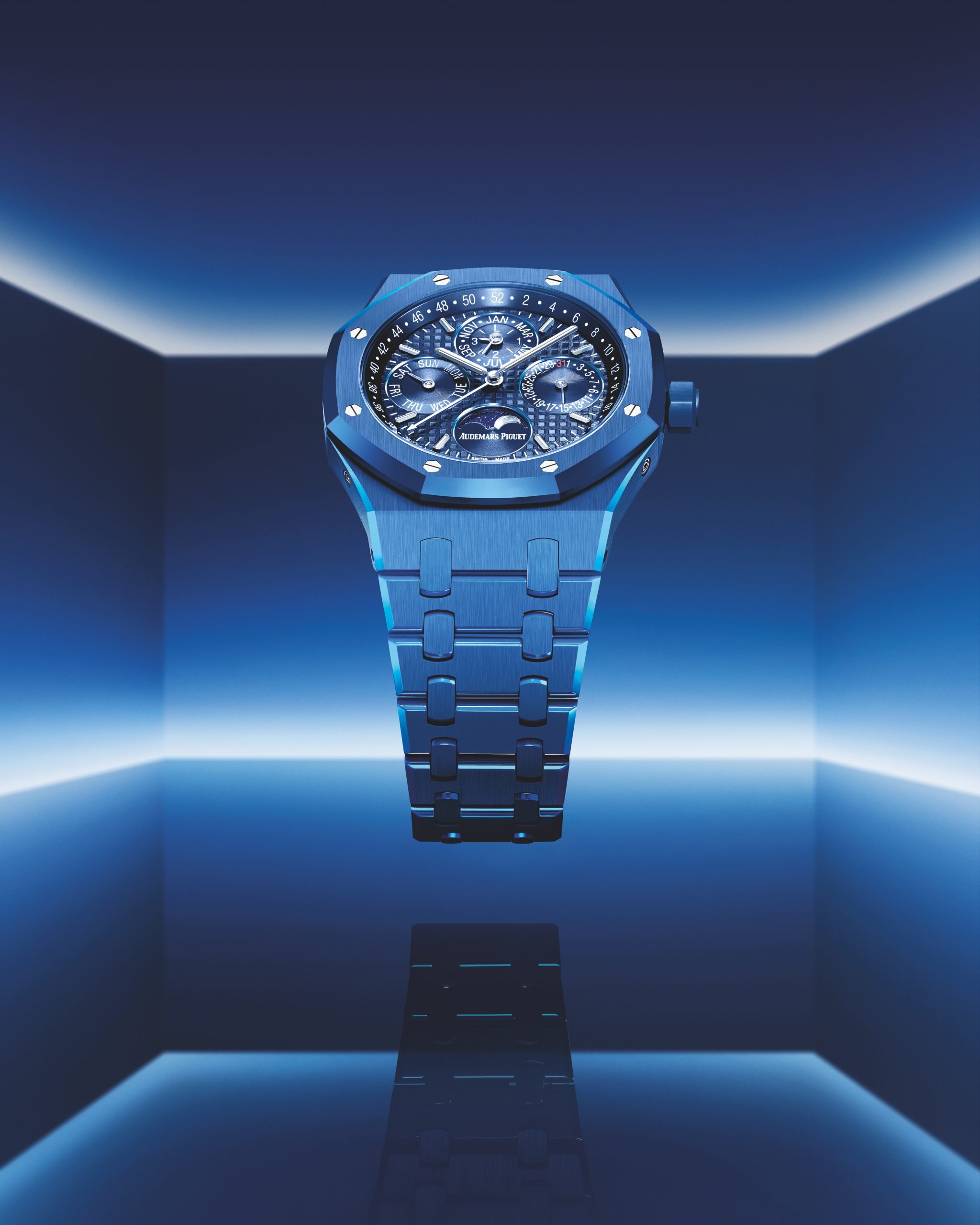 For the first time, the 41 mm case and bracelet of the Royal Oak Perpetual Calendar are entirely honed from blue ceramic. A light material resistant to wear and scratches, ceramic accentuates the slenderness of this timepiece measuring 9.5 mm in thickness.

Ceramic requires precise manufacturing and meticulous hand-decorations to respond to the Manufacture’s high-quality requirements. Zirconium Oxide (ZrO2) powder, modified to obtain a blue pigmentation once baked, is mixed with dedicated binder content before being transformed into ceramic through a complex industrial flow requiring different stages of high-precision machining. The exact composition of ceramic remains the secret of its manufacturers. The components achieve their final colour only once they have been sintered at more than 1,400°C. Reaching a homogeneous colour represents an additional challenge as ceramic’s final colour depends on the sintering temperature, which allows no variation.

The Le Brassus artisans have finished each ceramic component with the same detailed and meticulous hand finishes as they would if they were honed from precious metals: the Manufacture’s trademark alternation of satin-brushing and polished chamfers has been applied by hand with extreme care, resulting in a rich play of light which enhances both the ceramic and the multifaceted architecture of the Royal Oak.

The Manufacture’s artisans have harmonised the blue-toned colours of the Grande Tapisserie dial, subdials and inner bezel, obtained by Physical Vapour Deposition (PVD), to the blue ceramic case and bracelet, conferring the Royal Oak Perpetual Calendar a contemporary monochromatic aesthetic. The 18-carat white gold applied hour-markers and facetted hands, filled with luminescent coating for optimum visibility in the dark, provide a bright contrast. 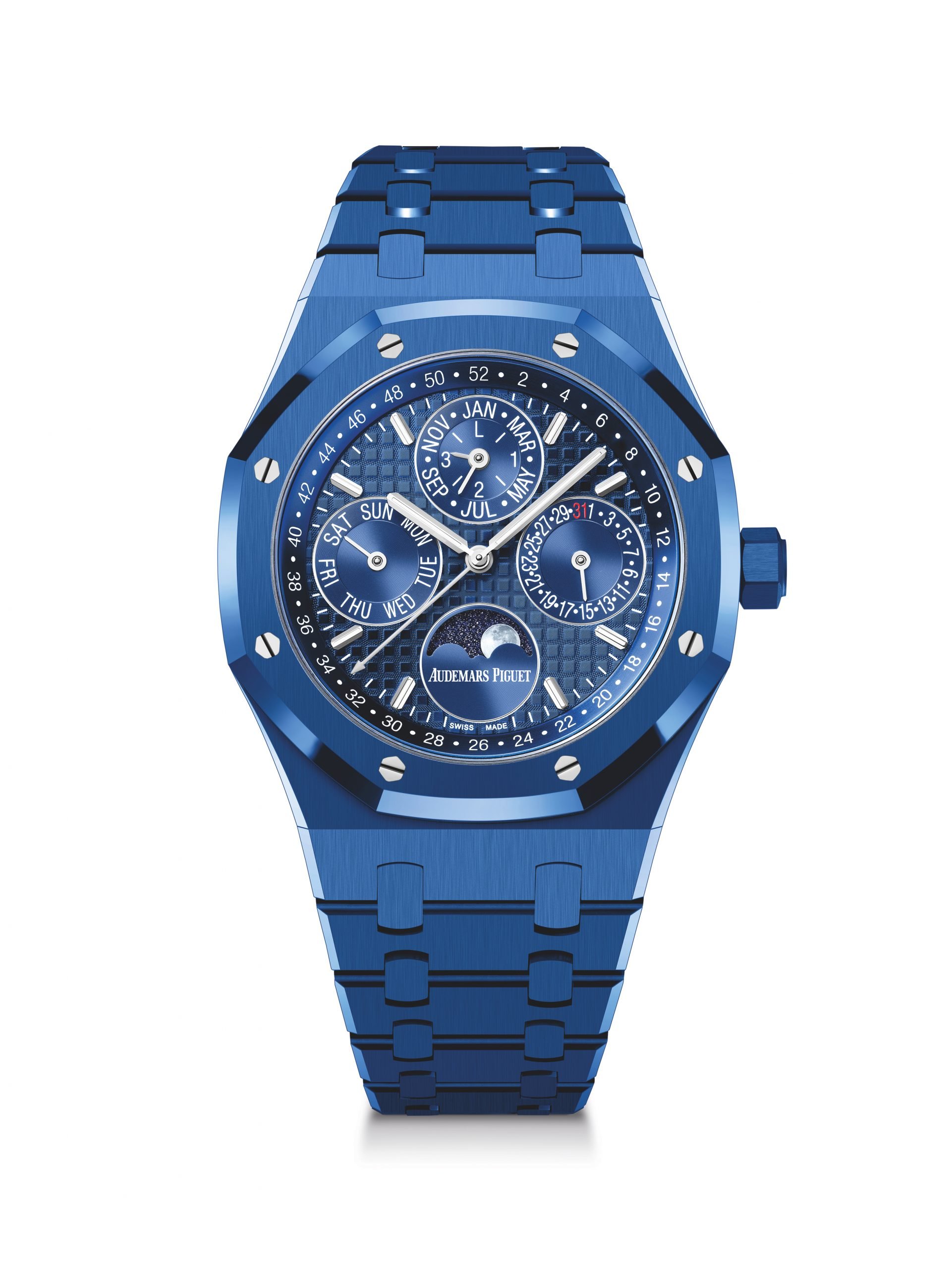 This new model is equipped with the self-winding Calibre 5134, which testifies to the Manufacture’s savoir-faire in terms of classic complications. This mechanism automatically takes into account the number of days in the month and correctly displays the prevailing date even in leap years. Assuming the watch is kept regularly wound, the date will not require manual adjustment until 2100 to stay in line with the Gregorian calendar.

Launched in 2015, this movement measuring just 4.3 mm in thickness necessitated the re-arrangement of numerous components, including its 22-carat gold open-worked oscillating weight. The bulkiest part of the rotor has been positioned to its outer edge which is recessed within a channel encircling the movement, thereby mitigating height. Likewise, the choice of a suspended barrel has contributed to reducing the movement’s thickness.

A LEGACY OF CALENDAR WATCHES

Astronomical watches are deeply rooted in the Vallée de Joux’s watchmaking history, as watchmakers have always drawn inspiration from the region’s clear night sky. Audemars Piguet’s uninterrupted history of astronomical complications started with the two founders’ school pocket watch masterpieces, both completed around 1875. The one of Jules Louis Audemars (Audemars Piguet Heritage Collection, Inv. 8), which combined a perpetual calendar with a quarter repeater mechanism and the rare independent deadbeat second function, saw several evolutions at the company’s workbenches over the following twenty years. Yet, during the company’s first two decades, calendar complications accounted for less than 10% of its total production.

The brand broke another record in 1978 at the height of the quartz crisis when it released the world’s thinnest self-winding perpetual calendar wristwatch of its time. Conceived in secret by three devoted watchmakers, the ground-breaking perpetual calendar wristwatch achieved its extra-thinness (3.95 mm) by using the ultra-thin Calibre 2120, launched in 1967, as a base. A total of 7,219 perpetual calendar wristwatches fitted with this calibre were put into production in the following 15 years. The success of Calibre 2120/2800 ushered in a new era of growth for Audemars Piguet and paved the way for the revival of classical complications. This calibre notably equipped many Royal Oak Perpetual Calendar models as early as 1984. 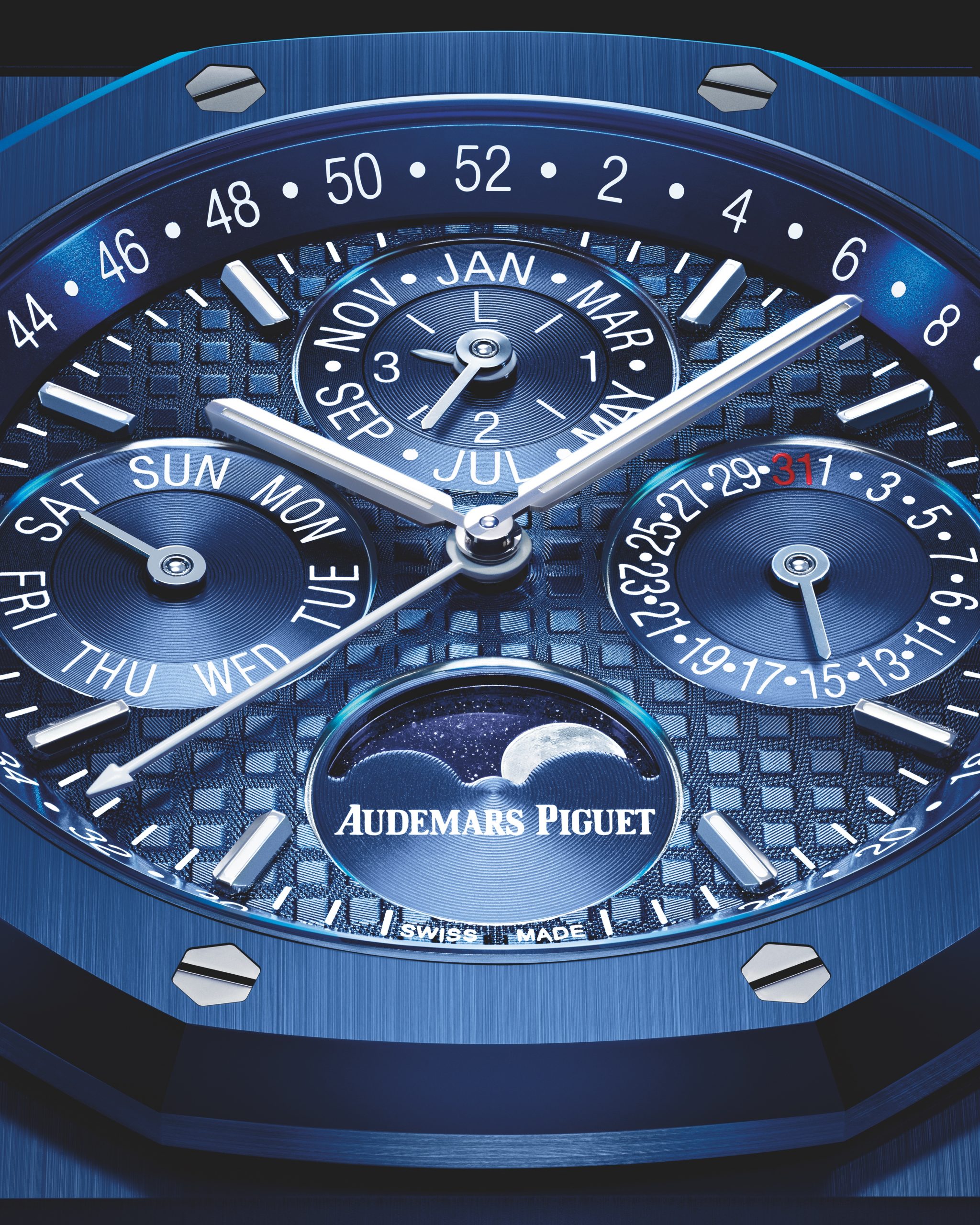 Launched in 2015, Calibre 5134 adapted the perpetual calendar movement to a larger Royal Oak 41 mm case diameter (Model 26574), while retaining a thin profile with its 4.3 mm thickness. This calibre has powered numerous perpetual calendar wristwatches across the Manufacture’s collection ever since.

In 2018, the Manufacture opened yet another chapter in its history of perpetual calendar timepieces with the advent of the revolutionary 41 mm Royal Oak Selfwinding Perpetual Calendar Ultra-Thin, known as RD#2 – the world’s thinnest automatic perpetual calendar wristwatch upon release. This 6.3mm-thick watch houses Calibre 5133, a newly engineered ultra-thin movement measuring a mere 2.89 mm in height, heralding yet another generation of astronomical watches.

“Born in Le Brassus, raised around the world.”

The White Wedding Dress: The Evolution of...