Swiss Haute Horlogerie manufacturer Audemars Piguet is delighted to present five new Royal Oak Offshore references interpreted in 37 and 43 mm sizes and in different materials: two models in titanium, two in gem-set 18-carat white gold and one in black ceramic. The Tapisserie dials bear the pattern of an equaliser (or VU meter) as found in recording studios. These references are equipped with self-winding movements driving hours, minutes and seconds hands: the new Calibre 5909 for the 37 mm models and Calibre 4309 for the 43 mm variants. These new models, with their original design, celebrate the creative synergies that the Manufacture has been cultivating with the music world for several years. 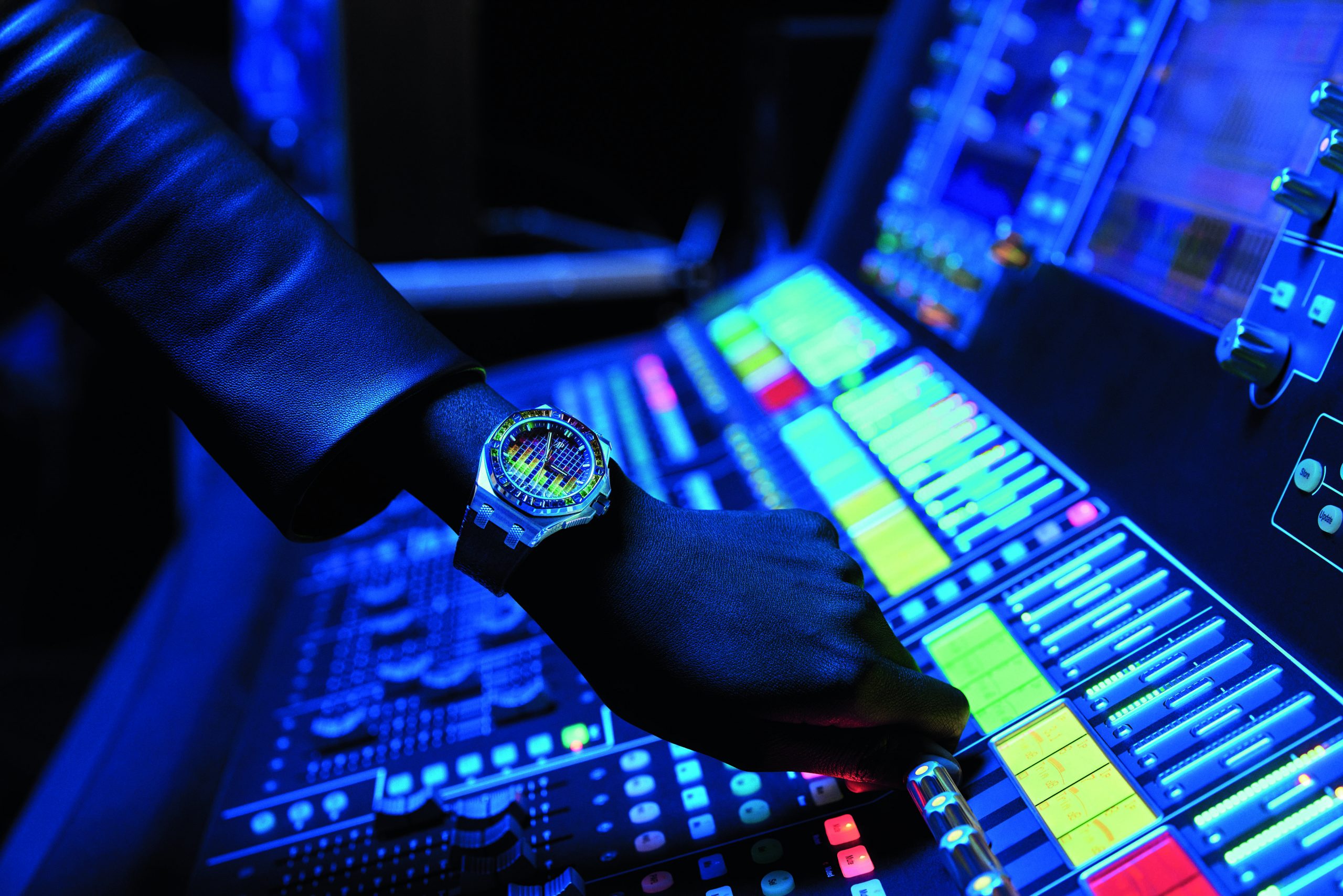 A TRIBUTE TO THE WORLD OF MUSIC

Sound has always been at the heart of the watchmaking art, long before time could be read on a dial, for example, thanks to bells striking the time. Ever since its founding, Audemars Piguet has constantly created bridges with the world of music, notably by playing a pioneering role in the development of chiming watches. The Royal Oak Offshore collection, for its part, has seen the birth of numerous collaborations with various artists, drawing on their inspiration and inspiring them in return.

Today, the new Royal Oak Offshore models celebrate this longstanding relationship: a Tapisserie dial reproducing the motifs of an equaliser, knurled-textured studs reminiscent of jack plugs and crown guards inspired by the fader on mixing consoles. Featuring a sapphire crystal curved along the 6 to 12 o’clock axis as well as enlarged bevels, these self-winding hours, minutes and seconds models radiate a colourful, pop-style appearance. 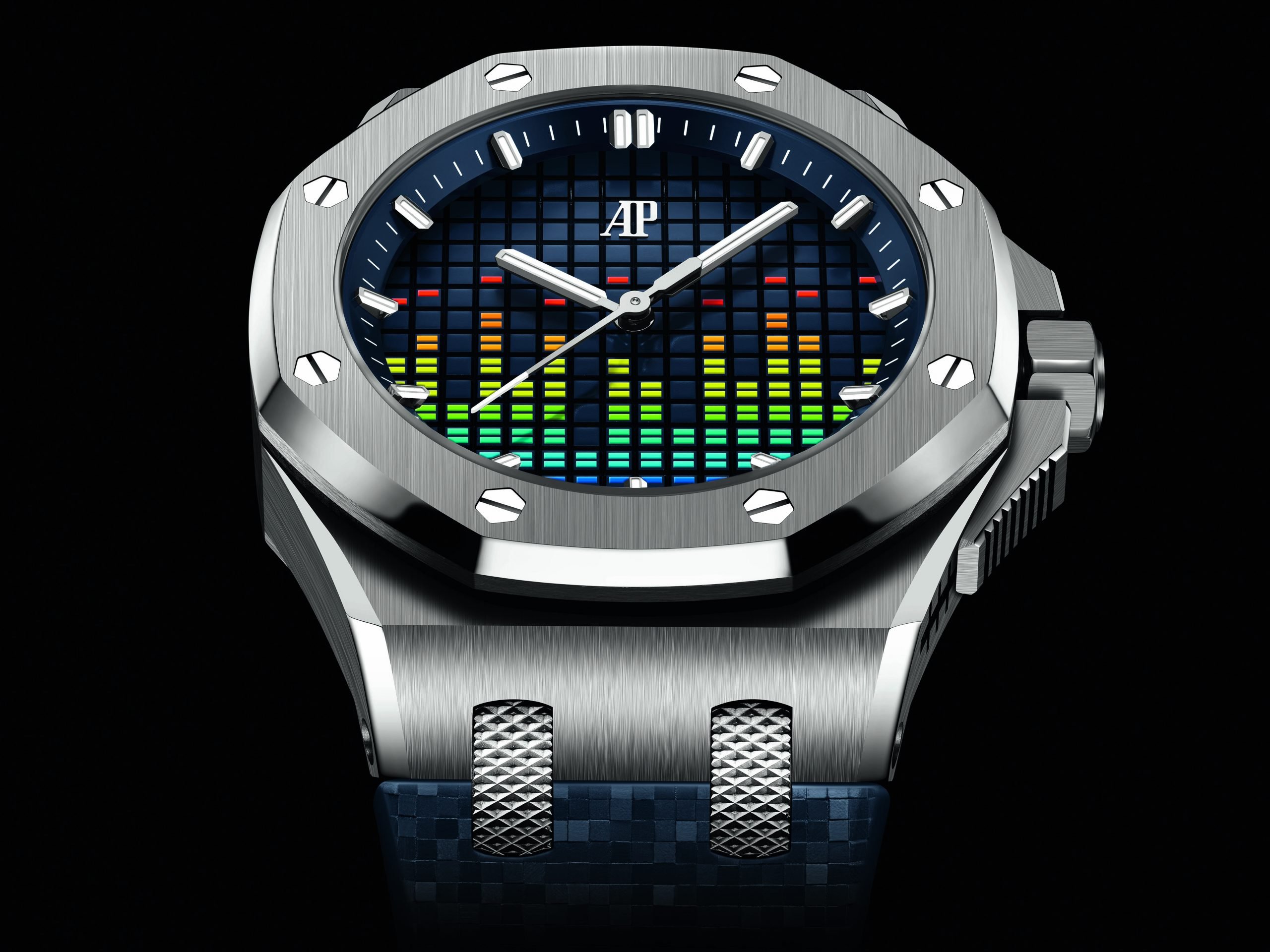 TWO DIAMETERS IN TITANIUM BOTH UNDERSTATED AND ROBUST

The first two Royal Oak Offshore Selfwinding Music Edition models are made of titanium and available in 37 mm and 43 mm diameters, thus adapting to different wrist sizes. Both feature a blue dial that serves as a background for the printed coloured VU meter, creating a shimmering contrast. The dial is complemented by the AP monogram in polished white gold at 12 o’clock, as well as 18-carat white gold hour-markers and hands featuring a luminescent coating for optimum visibility, particularly in the darkness of concert halls.

The 37 mm model displays the aesthetic codes of the Royal Oak Offshore chronographs of the same diameter and also picks up the enlarged bevels and the curved crystal of the latest 43 mm iterations. The absence of a date window leaves plenty of space for the coloured equaliser motif. The timepiece is teamed with an interchangeable blue rubber strap bearing a “mosaic effect” pattern and matching the dial colour. This is the first time that a 37 mm model has featured the interchangeable strap system introduced by the Manufacture in 2021 on the Royal Oak Offshore collection. The model comes complete with three additional turquoise, yellow and green rubber straps, also featuring a “mosaic effect” motif.

The 43 mm version is a continuation of the models launched in 2021. It comes with an interchangeable blue rubber strap matching the dial, while three additional turquoise, yellow and green rubber straps are supplied in the presentation box.

Equipped with a sapphire and titanium caseback engraved with the words “Limited Edition of 500 Pieces,” these two references offer a unique view of the self-winding movements powering them. 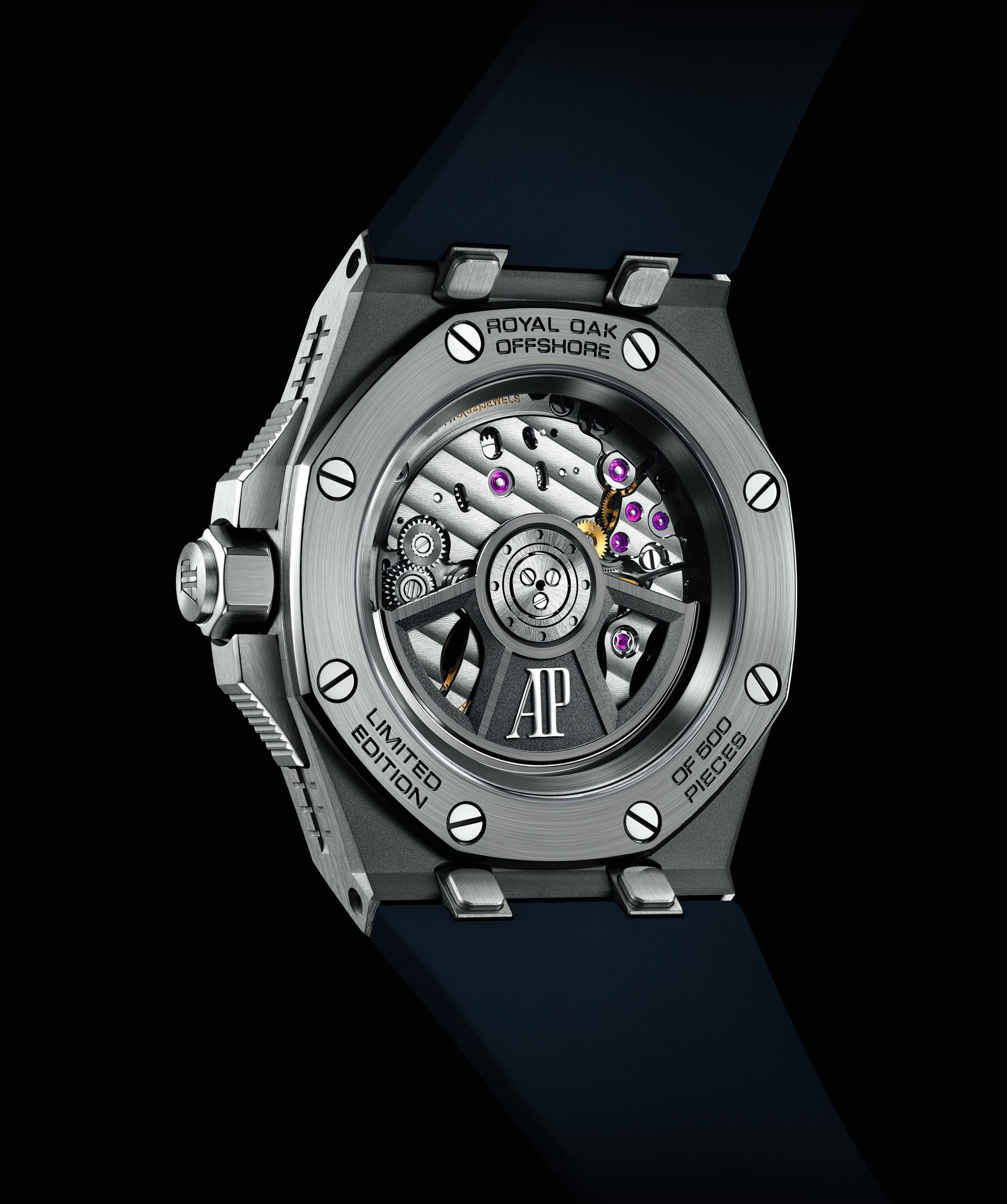 The “Harmony” cut has been developed in the industry to give more life to extremely fine gemstones. The cutting angles of each stone’s faceted pavilion have been adapted to provide optimal reflection while retaining a maximum colour despite the stones’ extreme fineness (0.65 mm for the dial). This technique also makes it possible to hide the grooves required for the invisible setting used on the dial to achieve a thin effect (maximum 0.85 mm for the dial). To reproduce the play of light on the dial, the stones adorning the bezel also feature the “Harmony” cut – an industry first for larger stones.

The 37 mm reference is adorned with 166 stones totalling ~3.7 carats, while the 43 mm variant sparkles with 230 stones totalling ~6.15 carats. Like the titanium models, these two references feature the polished AP monogram at 12 o’clock as well as 18-carat white gold hour-markers and hands. They are completed by a blue interchangeable strap – with a “mosaic effect” motif for the 37 mm reference – and come with three additional rubber straps in turquoise, yellow and green. 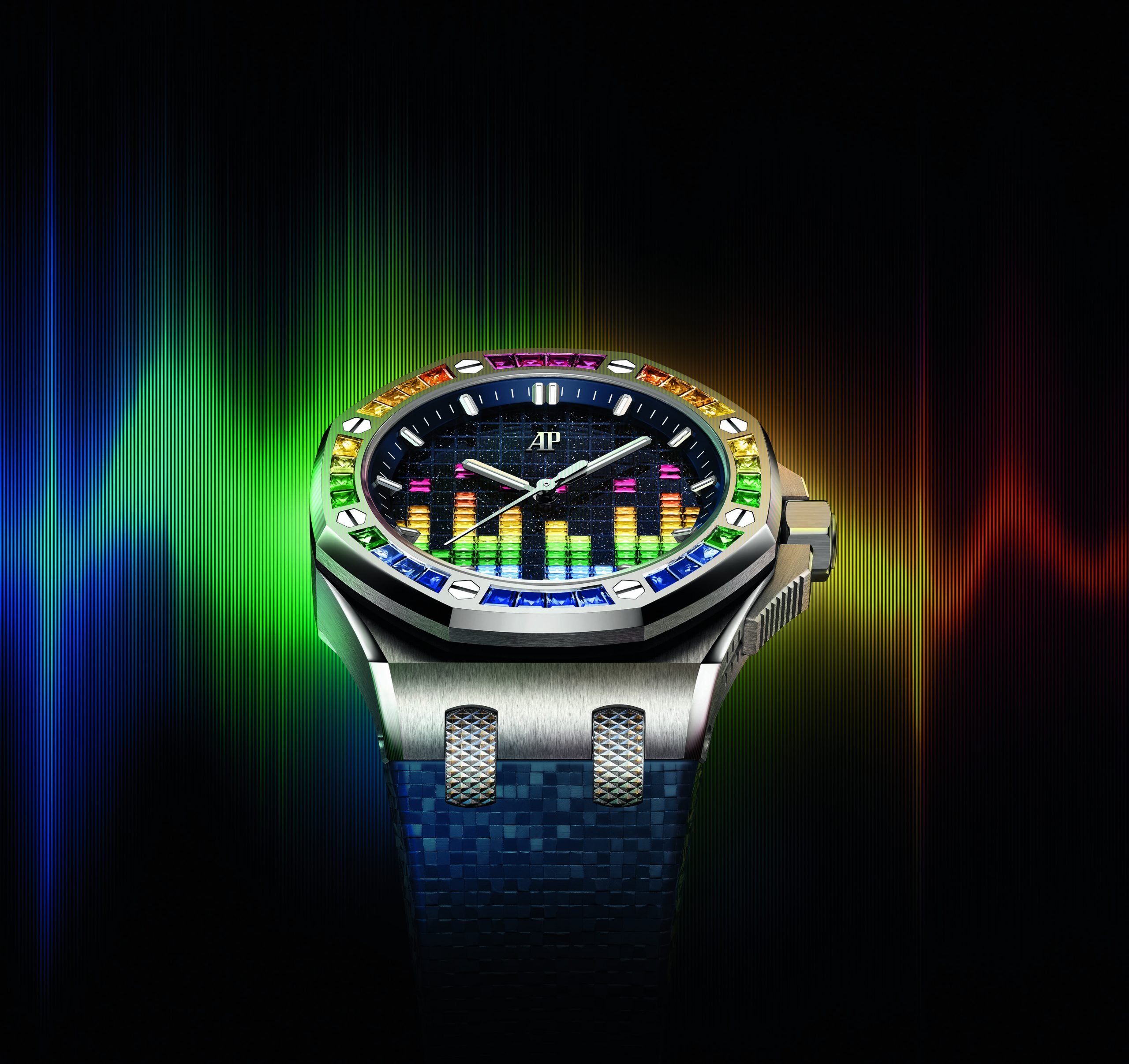 This new line dedicated to music is completed by a 43 mm diameter model designed in black ceramic. Its monochrome aesthetic is contrasted by titanium elements: the studs recalling the jack pattern, the fader-inspired crown guards and the strap pin buckle.

In contrast to the understated nature of this timepiece, the equaliser composed of 10 different colours printed onto the Tapisserie motif lights up the dial and gives it a very contemporary look.

The titanium and sapphire caseback revealing the hand-finished movement is engraved with the words “Limited Edition of 250 Pieces”. This modern, high-contrast timepiece is complemented by an interchangeable black rubber strap that matches the tone of the case. Three additional rubber straps in turquoise, yellow and green allow for variations in style to suit the wearer’s mood.

These Royal Oak Offshore Selfwinding Music Edition models are driven by two self-winding hours, minutes and seconds without date indication to keep the coloured pattern of the dial in the spotlight.

The two 37 mm references are equipped with the new Calibre 5909. This is the first time that a self-winding hours, minutes and seconds movement has been integrated within this diameter. Calibre 5909 is based on Calibre 5900, which first appeared at Audemars Piguet in 2022 on the 37 mm Royal Oak references. Replacing Calibre 3120, this movement has the advantage of being thinner (3.9 mm instead of 4.26 mm) and offering a higher frequency than its predecessor (4 Hz instead of 3 Hz). It also has a 60-hour power reserve.

The 43 mm variations are driven by Calibre 4309, the most recent self-winding hours, minutes and seconds movement of this diameter developed by the Manufacture. Its generous size enables optimal timekeeping precision, while its power reserve of at least 70 hours when the watch is not worn is ideal.

All models have a sapphire case back revealing emblematic Haute Horlogerie decorations, such as Côtes de Genève, satin-brushing, circular graining, traits tirés and polished chamfers, as well as the oscillating weight dedicated to the collection in 22-carat pink gold with black NAC coating. 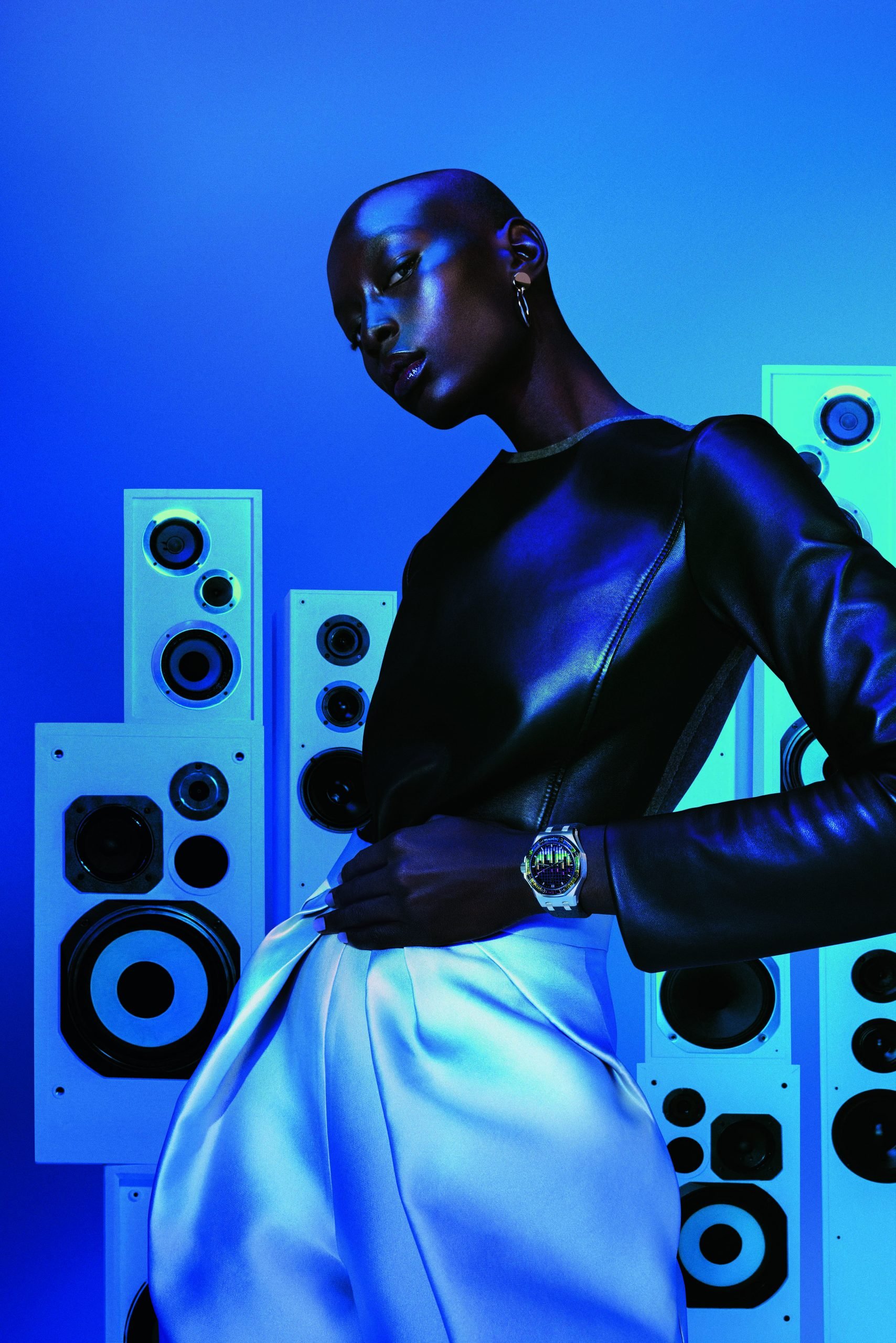 AP AND MUSIC, A LONG-RUNNING HISTORY

Over the past 20 years, the relationship between Audemars Piguet and the world of music – which began at the company’s creation in 1875 with the development of chiming watches – has grown ever stronger.

In 2005, Audemars Piguet revealed its first collaboration with a music artist: to celebrate the tenth anniversary of Jay-Z’s career; the Manufacture launched a Royal Oak Offshore limited edition accompanied by an iPod containing the artist’s discography. This first limited edition with reference to the world of music paved the way for other collaborations cementing longstanding friendships, notably with Quincy Jones in 2009, who shares the values of the Manufacture: technical mastery, precision and a taste for innovation.

In 2006, the brand embarked on research into the acoustic development of striking watches in partnership with EPFL, the Swiss Federal Institute of Technology Lausanne and a panel of experts composed of watchmakers, engineers, musicians and sound specialists. Eight years of research resulted in the development of a system that combines a chiming mechanism with an innovative case architecture, marking a significant advance in terms of acoustic performance, sound amplification and sonic quality. Three patents have been filed for the Supersonnerie technology featured in the Royal Oak Concept Minute Repeater Supersonnerie, which won the “Mechanical Exception Watch Prize” at the 2016 Grand Prix d’Horlogerie de Genève.

In 2010, Audemars Piguet pursued its commitment to the musical scene by joining the Claude Nobs Foundation and EPFL in supporting the Montreux Jazz Digital Project. This large-scale project has enabled the digitisation, conservation and enrichment of the festival’s entire audiovisual archives, listed on UNESCO’s “Memory of the World” programme. The links between the Manufacture and the Montreux Jazz Festival were further strengthened in 2019, when Audemars Piguet became a Global Partner of the festival.

Since 2019, the Manufacture has continued to foster creative exchanges with the world of music, notably welcoming DJ, composer and producer Mark Ronson as an ambassador in 2022 and working with him on various inspirational projects. This new Royal Oak Offshore Selfwinding Music Edition line accentuates the synergies between the two worlds while endowing the collection with a new colourful aesthetic that will delight music and watchmaking enthusiasts.

“Born in Le Brassus, raised around the world.”

Take a trip to My Town with Ted...

ADIDAS AND RICK AND MORTY TEAM UP...