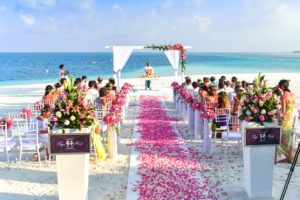 Floral decorations, fancy gourmet dinners, live music, lights, camera, action, multi-level cakes, open bar, dancing aunties and an emotional daddy, a jubilant bride, an exuberant groom — these are some of the terms that are synonymous with a wedding. But what is that one thing which everyone waits to see with the most eagerness? — It’s the wedding dress!

Wedding dresses are made to custom, many months in advance, with a lot of love and care by the bride, groom and their families. There’s also a lot of anticipation built up by friends and family, who constantly guess the answers to questions like, “What are they going to

wear? What colour? Which designer label? Who’s going to design it?”

In recent times, the trend has been veering towards holding a white wedding, just like how it’s in Western cultures. But there are several regions in the world which still practise their traditional beliefs during weddings.

As summer is touted to be the ideal wedding season and wedding planning and shopping is in full swing around the globe, let’s have a look at some of the most beautiful ethnic bridal wear from around the world, based on region: 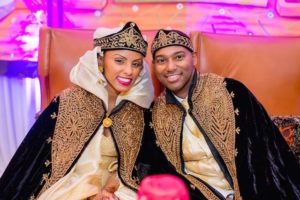 The Habesha Kemis is the traditional dress worn by Ethiopian and Eritrean women during weddings and other important days. The Zurias or Telfis, the traditional Tigrigna white dresses, are more commonly associated with the Eritrean culture.

Velvet crowns and robes in gold and purple make a big part of a traditional Eritrean wedding dress. The bride braids her hair and applies henna designs on her hands and feet. Embroidery along the neckline and sleeve dazzles throughout the dress. The cross which is embroidered at the bottom, forms an essential part of the dress.

The gowns usually vary in size, some ranging from ankle-length to floor-length. The brides usually accompany the gown with a “netela,” a matching shawl that adorns the gown. 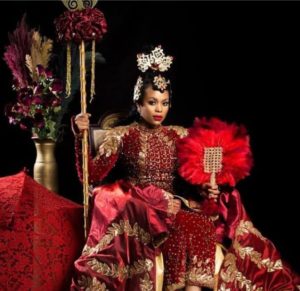 The strong and aggressive Efik people of the southern and eastern parts of Nigeria, have a rich history of beautiful traditional dresses that makes them stand out on their wedding day.

Weddings usually are an intimate affair with a lot of importance on family values and bonds. The Efik brides have two dresses on their wedding day, the first one being “Ofod Ukod Anwang” which symbolises her beauty. This dress is a knee-length skirt and blouse that reveals her waist along with jewellery, beads and body paint. The next one is “Onyonyo” which is a dress embellished with beads. 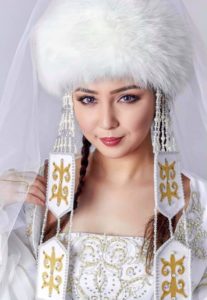 Kazakh women dress to represent their country’s deep historical significance. The floor-touching camisole, worn by the Kazakh brides is adorned with jewellery and embroidered with rich patterns, mostly made out of leather, fur and thin felt. The dress’s inner lining is insulated by a layer of wool.

And here comes the highlight — The head dress! The headgear of a Kazakh woman represents her relationship status. Skullcap scarves are usually worn by spinsters, and the elite girls have hats that are made of velvet fabric decorated with a golden thread.

The bridal headdress is called the “saukele,” spanning a foot in height and embellished with pearls, corals and silver. The “Zhaktau,” a long suspension bracket, is tied to the sides, which forms the perfect frame for the bride’s face. 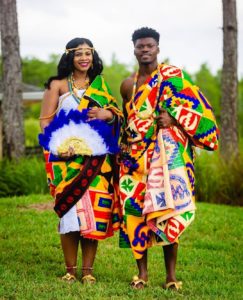 The effervescent, legendary, colourful, traditional gowns of Ghana have been an inspiration for designers throughout the world. They come in cheerful prints and are made out of a beautiful fabric called the “Kente.” For weddings, the bride wears a sarong-like dress made of Kente.

For ages, the Kente has been one of the most popular fabrics from Ghana across the world. And it’s almost always handmade and designed to perfection. 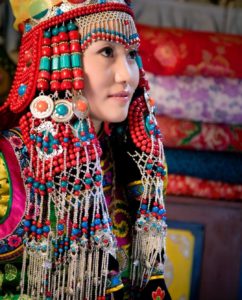 For centuries, Mongols have been following their rich traditions for ceremonial events. “Deel” is a traditional dress commonly worn by the Mongols and other tribes. It is made of cotton, silk and brocade. It is not only worn on special occasions, but also, sometimes as an everyday wear outfit. It’s a unisex dress worn both by men and women, covering the entire body. Good quality decorated Deel is worn for the traditional wedding ceremonies in Mangolia. 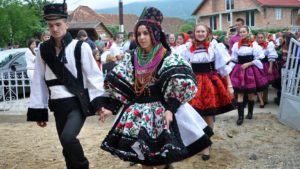 Romania is a country that still has its roots in its small country villages. When a wedding usually takes place there, it becomes an occasion for the entire community to bond over.

“Fota” is a unique bridal wear worn by Romanian women. It is made of cotton or wool and is beautifully decorated along with skirting known as the “marama.” Here again, the headgear plays a vital role in the ceremony, distinctively denoting the married woman’s status. Different regions of Romania have different headgears. 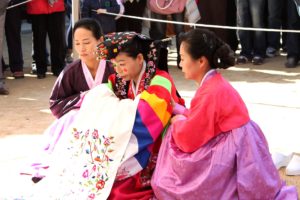 The traditional wedding dress of Korea, the Hanbok, dates back to its three Kingdoms period. The Hanbok comes from the Silla Kingdom which has its roots in the Tang dynasty. The clothing has a lot of influences of this dynasty. It is not only worn by the bride on her special day, but also by Koreans on formal occasions. 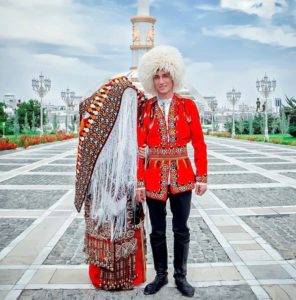 Turkmen bridal wear is adorned with rich ornaments and decorations usually stitched on lucky days that are suitable for sewing, as it is believed that the welfare and well-being of the bride is dependant on it. It is usually made at the bride’s house from a fabric gifted by the groom.

Another tradition is that the dress is usually cut by an elderly, respected woman who has borne many children. She is allowed to take a few pieces of the cloth in return for good luck. The face of the bride is covered with a long scarf with beautiful embroidery. The entire dress is decorated with pendants. 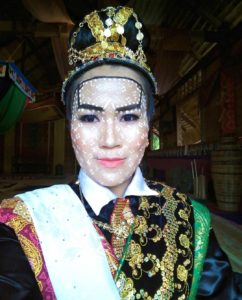 The Yakans, a small indigenous Muslim tribe, hail from the southernmost region of the Philippines in Sulu Archipelago. The Tanyak Tanyak is a distinctive face painting custom unique to Yakan tribal culture during weddings. Their traditional dresses are weaved out of abaca, pineapple and bamboo. The bridal jacket, known as the “Pagal Bato” is made out of satin or cotton along with lurex threads. Their dresses are influenced by their island’s geometry. 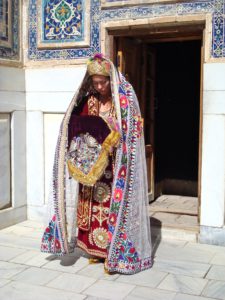 Uzbek weddings are filled with dance, feasts and rituals that date back several centuries. Their wedding dresses are similar to a tunic and includes a long gown and pants made woven out of traditional uzbek silk. It is deeply embroidered in gold and silk along with floral patterns. 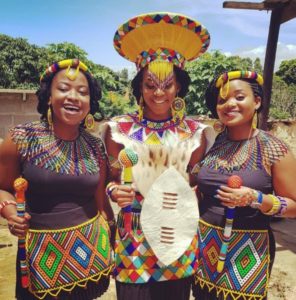 The two-day Zulu weddings are celebrated with lots of singing and dancing. The wedding dress represents their respective tribe. According to Zulu traditions, a group of females help in decorating the bride with red and white ocher over her limbs. Then, oxtail fringes are tied to her elbows and knees. A goat’s hair fringe is hung around her neck and pebbles around her ankles. Her veil is made of fig leaves and beads. She wears a leather skirt called “Isidwaba” and an animal skin called “Isicwaya” over her chest. 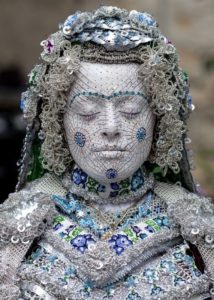 The Goranis are a group of Slavic Muslim people living between the regions of Kosovo, Albania and North Macedonia. Their wedding includes rituals are rooted in traditions. The first thing that is most distinctive about a Gorani bride is the elaborate white face paint done to “ward off evil eye”. A colourful dress with multiple floral pattern along with a scarf is made for the bride to wear as her wedding dress. 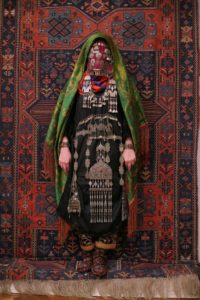 The Avar tribe is the native ethnic group of Caucasus found in the regions of Russian Republic of Dagestan. Elaborate gowns full of colours and patterns that go down to the floor is worn by the Avar bride on her wedding day. A big colourful shawl is also worn, covering head to toe. A small scarf covers the entire face. The wedding ceremony includes lots of music and folk dance. 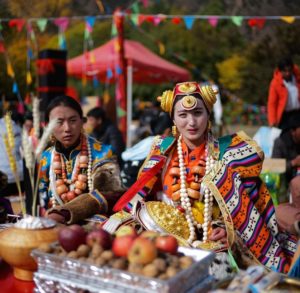 In Tibetan culture, the nomadic tribes who inhabit the country’s mountains, wear long sheepskin coats made of wool called “Chuba” on their wedding day. It’s an ankle-length robe, tied together around the waist by a long sash along with a large pocket. 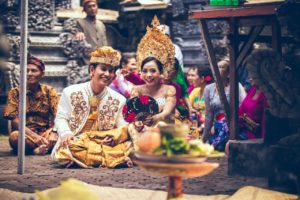 A Balinese wedding is made of colourful costumes that personify their unique culture. The wedding dress is chosen by the family members. Songket is the material used for the dress. It is made up of golden threads with beautiful layers of bright hues like blue, yellow, orange and red, which represents happiness and celebration. The different kinds of luxurious Songkets show the economic status of the family. The crown worn by the bride indicates the caste status in their society. The higher the crown, the higher the caste. 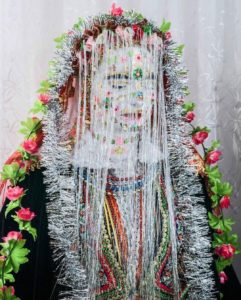 The Pormak or Muslim Bulgarians are a tight-knit community that adheres to old traditions with fervour. The attire of the bride is very interesting and unique. As a part of the bride’s costume, her head gets covered under a red veil and her face is hidden under a white mask with sequins. The bride is made to lie down with her eyes closed and an elderly woman covers her face with a white cream making her face and features indecipherable. Shiny sequins are then stuck to her brows, forehead and cheeks creating elaborate designs.

Met Gala: From Gigi Arriving as her...