What happens when two of the world’s top pro paragliding pilots are introduced to the world’s largest fountain?

A whole lot of fun (not to mention some spectacular content).

In the spirit of demonstrating that anything is possible – by even pushing their own adventurous boundaries – Red Bull athletes Horacio Llorens and Rafael Goberna teamed up to take part in an exclusive one-off stunt to showcase the beautiful Palm Fountain at the Pointe, Palm Jumeirah in Dubai.

And this performance – now showing in a new Red Bull TV short film, “The Breaking Pointe” – didn’t just involve your typical paraglide… With the world-renowned Atlantis, The Palm Jumeirah resort as a backdrop, Llorens and Goberna donned special paramotors to take to the sky, gliding between the Palm Fountain’s jets of water that were so close they could feel them. 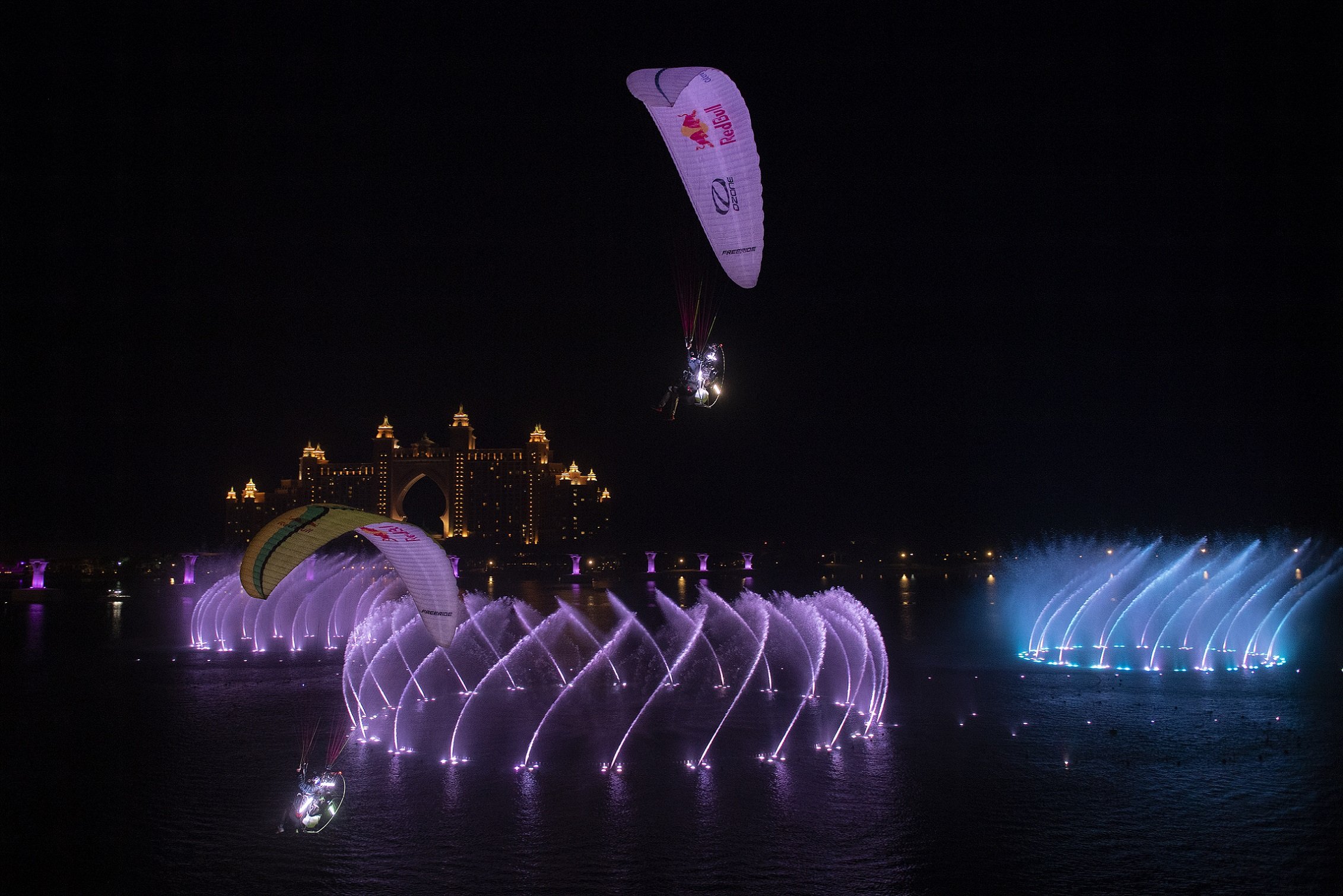 In the film, the athletes – along with a large team of specialists – demonstrate just what it takes to plan a stunt of this kind. It’s definitely not just a case of turning up and flying – there’s pre-event training, there’s engineering, there are multiple safety precautions, as well as intensive training sessions and practising choreography.

“As soon as we got the opportunity, we wanted to fly there!” explains pro paragliding pilot Llorens. “The ultimate challenge is that we were flying in the night, which means low visibility. Therefore, we needed to know the area really well beforehand.

“Also – we needed to know how to ‘play’ with The Palm Fountain… this was new for us. And with such strong streams of water shooting up, 100 metres is a lot, so we had to be really prepared!”

Llorens and fellow athlete and friend Goberna had been discussing and practising tricks and choreography for some time prior to arriving in Dubai. Once in the emirate, the duo and the entire project team – conducted trial runs in the Margham Desert in daylight for two days.

ADJUSTING TO THE CLIMATE

Paragliding with a paramotor is a complicated process and requires skill, patience, and very precise planning.

Many extreme adventure and sporting fans might not know that paramotors require to be adjusted according to their location.

“During training, that’s when we were testing the paramotors, adjusting the gliders and the brakes,” continues Llorens. “Rafael [Goberna] did have a little problem with his motor.”

Goberna elaborates: “The motor wasn’t flying so good, because prior to arriving in Dubai, it was last used in Europe at high altitude. Therefore, I needed to adjust the carburettor in the air inside the motor.

“In the first practice flight over the water, I broke one propeller. I really couldn’t understand what was happening. And then another one broke. Eventually, a back-up motor was required.”

Refusing to give up, the entire team worked tirelessly to be “fountain-ready” and show day – and the results, as showcased in the video, are spectacular.

“It was super nice for us to have finished for us this way – the process was definitely challenging from the very beginning,” concludes Goberna. “After a long journey, the result was beautiful! The team worked incredibly hard to make it.

“The highlight for me was playing between the super shooters with Rafael because it’s something we’ve never done before; it felt really new and really powerful – with the water coming to our sides extremely high.”

Goberna adds: “You feel the air coming up with the water – and the water splashes against your face because it’s so strong. It was such a nice experience.” 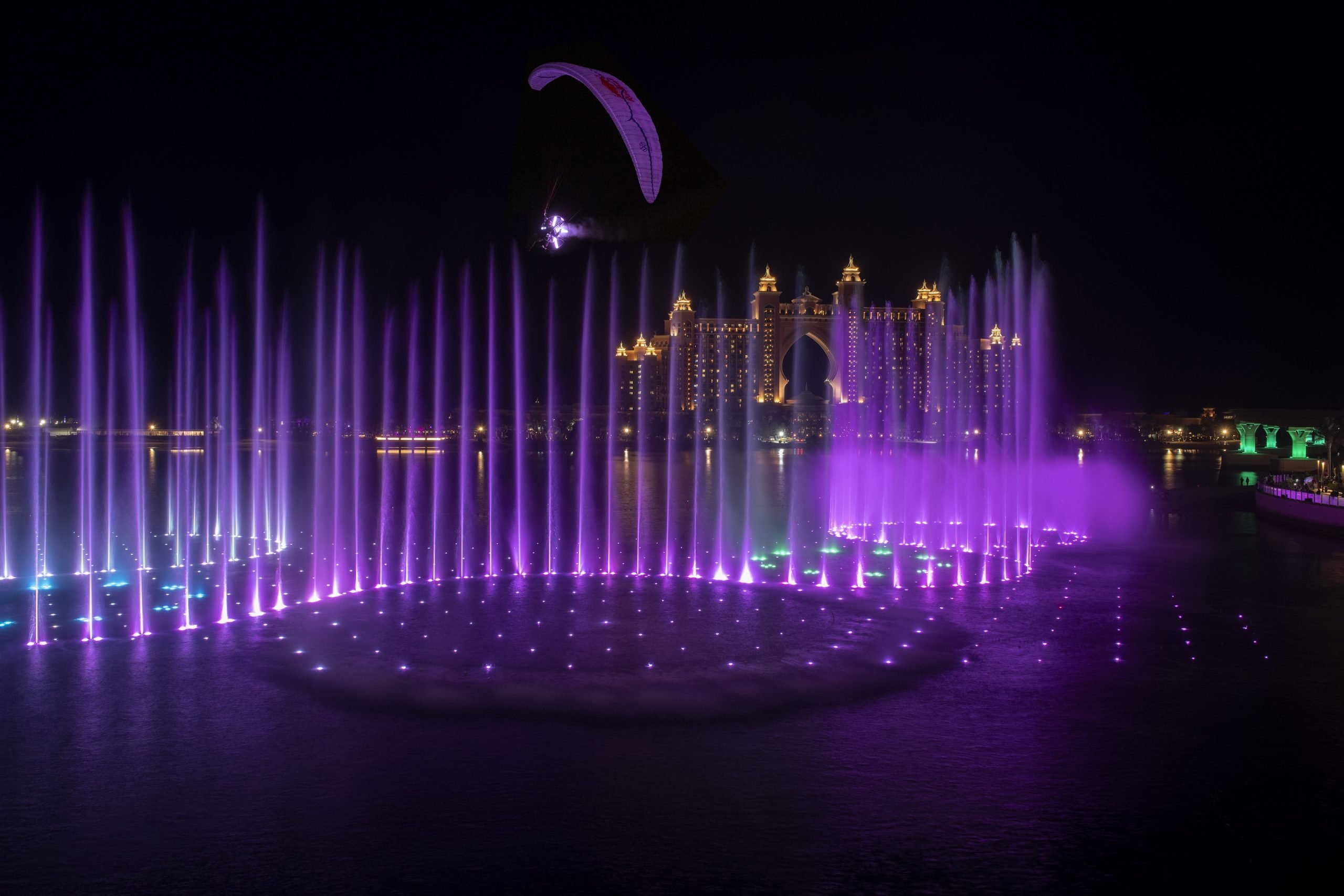 As “The Breaking Pointe” demonstrates, a lot of work went into the showcase – one of the most important aspects is learning how to navigate The Palm Fountain. With both sides having different choreography, Llorens and Goberna had to study the water movement with great precision not to get caught up in the jets of water.

“Obviously, safety is paramount, and there is a multitude of safety devices we use on paramotors,” explains Director of Safety Alan Gates. “Each athlete used two parachute systems – the main which they fly normally. In the case of an emergency or when they have a technical issue, they would use a reserve parachute.

“When we’re flying over water, it’s also mandatory to wear a life jacket with automatic and manual inflation. We always have rescue boats, jet skis and divers… it’s important we have multiple teams for rescue and safety.”

CELEBRATE WITH JUMEIRAH AT SAADIYAT ISLAND THIS...