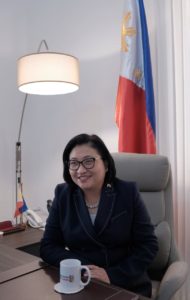 TELL US A BIT ABOUT YOURSELF AND YOUR CAREER.

I’m a career diplomat. I’ve been with the Ministry to be an ambassador, which by experience would take at least 20 years to become eligible. In the Philippines, The Foreign Service Act is the law that regulates the career ladder of foreign service officers.

How did I end up here? I wanted to pick a government career where I can make a difference.  After graduating from university, I cannot imagine myself being in the private sector. I thought that I must use the gifts and talents God has given me for a greater purpose.

As a diplomat, I have been assigned to four postings before serving as Ambassador to the UAE. The first post I was assigned to was the Philippine Embassy in Beijing. Then I was assigned to Washington, DC. I was also posted to Ireland when the Philippines opened an embassy there. After that, I was appointed to Oman. After two and a half years in Oman, I thought I had just barely scratched the surface, and if I continue, I will be learning more about the region. Prior to being appointed to the UAE, I was Assistant Secretary for Middle East and Africa Affairs where I covered the region on a policy level.

Today, I am serving as Philippine Ambassador to the UAE, which is my first ambassadorship. Having been appointed by the President as an ambassador to this country is a great honour. This is a dynamic region, I know that serving in the UAE is important especially since I have many compatriots who are making a living in this region, and I thought I would have an opportunity to change some perspectives and policies. This way, I think there would be a real change in how we do things, as well as how we relate with other countries.

WHAT DOES IT TAKE TO BECOME AN AMBASSADOR?

It’s a long-term career in the government. There are levels to pass through to rise up the ladder, and mostly it is a tough experience. One has to have a lot of patience. Shortcuts are rare.  It’s a commitment when you tell yourself that this is the career you want to have. There are a lot of factors to becoming an ambassador, including political and personal ones.

HOW DOES A CAREER IN AMBASSADORSHIP START?

The Foreign Service Act of the Philippines mandates that all aspiring diplomats should take and pass the Foreign Service Officer examination, which is one of the most difficult professional qualifying examinations in our country. Everything about the career leading to the position of ambassador can be read in the law. The Foreign Service designates ranks which correspond to titles. My current rank is Chief of Mission which qualifies me to be an ambassador.

WHAT WOULD YOU SAY HAS BEEN YOUR BIGGEST CAREER ACHIEVEMENT SO FAR?

For some, a career in ambassadorship might easily be taken for granted because one doesn’t get a chance to stay long in the country of assignment. In our case, we are away from home for six years, and those six years might mean staying and getting assigned to different countries or regions. You have to make those years count to serve wholeheartedly and with integrity.

WHAT DOES THE ROLE OF THE PHILIPPINE AMBASSADOR TO THE UAE ENTAIL?

As ambassador, our main job is to act as a bridge between the two governments. An ambassador also engages in public diplomacy, which means that I communicate with people from different sectors of society. Strictly speaking, I’m the representative of the President of the Philippines.

I am also an advocate in the sense that I want to expand and nurture the relationship of the Philippines with my host country.  Incidentally, this year is the 40th anniversary of our diplomatic relations with the UAE. Planning for diplomatic activities should require a study or analysis of the countries’ relations over the years. What is our level now? What’s the stage of the relationship? Is it maturing? Is it ready for the next phase? Do we expand our engagement, or are we just going to concentrate on existing areas?

It’s important that I don’t only represent my own country’s perspective but also respect the perspective of the host country. When I engage with them, I can assess that we are now ready for the next stage. We can build upon the very strong relationship that was developed over the years. I would say the experience of serving as an ambassador is unique in every country.

WHAT IS THE BIGGEST CHALLENGE YOU’VE FACED SINCE BECOMING AN AMBASSADOR, AND HOW DID YOU OVERCOME THIS?

The Filipino community is one of the biggest expat groups in the UAE so it is a bit challenging in terms of balancing the different expectations of people.  I try to be creative in doing my job and provide a breath of fresh air.

The environment, culture, and perspectives here are different from my country’s so some adjustments may be necessary. You need a sincere heart to engage the people in your host country and serve the country you represent, as this will help you overcome the challenges.

WHAT ADVICE WOULD YOU GIVE TO SOMEONE INTERESTED IN BECOMING AN AMBASSADOR?

Those who aspire to be ambassadors need to understand the other side of this career, the less glamorous side, shall I say. The number one piece of advice is to possess a genuine love of one’s own country.  It’s a long journey. Even if you’re able to enter the Foreign Service, being appointed as an ambassador is not a guarantee. Dedication is another key ingredient.

IF YOU WERE NOT A REPRESENTATIVE OF THE EMBASSY, WOULD THE PHILIPPINES BE AN ATTRACTIVE TOURISM DESTINATION FOR YOU AND WHY?

We all have different travel preferences. It depends on which country you’re coming from, as well as your budget and your goals.

The Philippines is known for its spectacular diving spots and marvellous beaches. But do you know what sets us apart from other countries? Filipinos are widely known to be warm-hearted, humble and hospitable. Pinoys will welcome you with their genuine smiles, and our hospitality turns every tourist’s trip into an even more enjoyable stay. We will take care of tourists with utmost care. That’s why a trip to the Philippines is almost always a wonderful, unforgettable experience.

HOW DO YOU ENGAGE WITH OTHER COMMUNITIES IN THE UAE?

You will not run out of ideas, options, and opportunities.  They’re very engaging here, and it’s a very open relationship. You feel the openness because of the presence of diverse nationalities. You’re not really just dealing with one set of people, it’s almost like the whole world.

The challenge is more on getting to know the locals. That’s why I like to visit places like heritage villages to get a chance to meet the local population. It’s a multicultural environment here, and the atmosphere is cosmopolitan. If you cannot speak Arabic, you can still communicate with the locals. Emiratis are indeed very nice and warm-hearted.

WHAT IS YOUR PERSONAL GOAL AS AN AMBASSADOR?

I am not going to talk about achieving something. I am more focused on the step-by-step process. Nobody else can propel you to the next step but yourself.  It’s quite hard to achieve something when you’re not in control of many things. So if there’s something that I need to do that requires the help of others and that is not their priority, the challenge is how to make it their priority, too.

I have a very close relationship with the Lord. I believe that everything that happens to me, of course, is preordained by Him. I know that He will lead me to people who will help me with the things He wants me to accomplish. It should be a fun process.

What will I expect to see here? How different is this country from other countries? When you want to achieve something, you have to study the country. What can I do for this country? What are the concerns of the people I represent here? The fun side is you’ll get a lot of opportunities to interact and solve problems.

I want to be visible to everyone. I’m not the armchair type of ambassador.  I don’t want to sit in the office all day. Two or three years may pass by with nobody even knowing me at all. Nobody might hear about the Philippines. It’s a good thing that the ambassador’s car has a flag. I can go around Abu Dhabi displaying my flag proudly. That’s what I like about this career. It doesn’t box you in at all. It may be limiting you to do something because of the rules and regulations, but in the end, there are many opportunities to explore.

WHAT IS THAT ONE QUOTE YOU LIVE BY?

I can’t think of any quote right now but I like the poem “If” by Rudyard Kipling. It’s about balancing everything in life. There are many things I can and can’t do but still, as I was able to overcome those contradictions, then I’m able to say to myself that all of the years I spent are worth it.

I can only do so much. You cannot have the illusion that what you did was monumental. The way we describe it is akin to the existence of an unplanted seed: we only reap the harvest when we plant it.

Behind the Brand with Mustafa Abbas –...