UFC® announced that champion Aljamain Sterling will defend his bantamweight title against no. 2 ranked TJ Dillashaw in the co-main event at UFC® 280: OLIVEIRA vs MAKHACHEV - the latest UFC event in Abu Dhabi in partnership with the Department of Culture and Tourism - Abu Dhabi (DCT Abu Dhabi). This will be Sterling's second defence of the title he won in March last year, taking place at the Etihad Arena on Yas Island, Abu Dhabi. 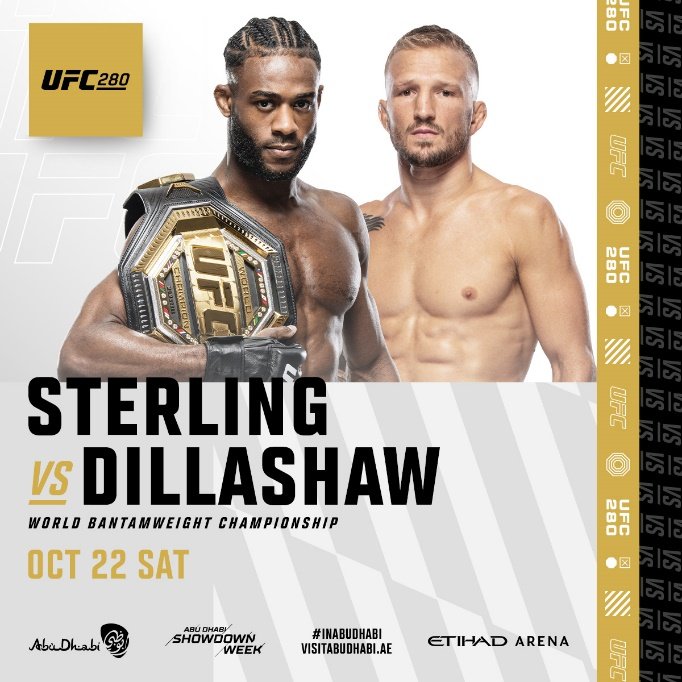 Aljamain "The Funk Master" Sterling (21-3) has been in the UFC for eight years, patiently working his way up to the peak of the division. He will be riding a seven-fight win streak when he arrives in Abu Dhabi, including back-to-back wins over former champion Yan in his last two outings. Sterling, 33, will be fighting outside the United States for the first time in his 24-fight professional career as he looks to cement his place at the top of the 135lbs division.

His opponent, Dillashaw, has been a leading light in the bantamweight division for more than a decade now. He is a former two-time champion, having first tasted title glory in 2014 before going on to repeat the feat in 2017. The 36-year-old holds a number of UFC bantamweight records, including most wins (13), most wins by KO/TKO (7), most title fight wins (5), and an impressive eight fight-night bonuses along the way.

It is the latest blockbuster fight to be added to the October 22 card, which will be headlined by Charles Oliveira taking on Islam Makhachev for the vacant lightweight title. Also on the card is another key bantamweight bout between former champion Petr Yan and talented prospect Sean O'Malley.

UFC® 280: OLIVEIRA vs MAKHACHEV will be the latest event held in the UAE capital as part of a landmark partnership between the world's premier mixed martial arts organisation and the Department of Culture and Tourism - Abu Dhabi (DCT Abu Dhabi), which began in 2019.

October will also see the return of Abu Dhabi Showdown Week, running from October 17 -23, anchored by UFC® 280 and consisting of other sports and entertainment ancillary events powered by Flash Entertainment.

UFC® 280: OLIVEIRA vs MAKHACHEV VIP ticket packages are now available from the website.

Get up close with the world’s most...