The Dark Truth About Eating Disorders 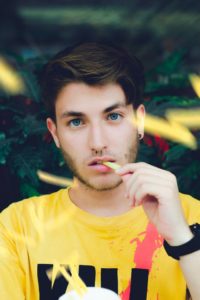 Social media has severely distorted the way modern society views the real world. Comparing one's body image to airbrushed and heavily-edited images of social media personalities has taken a toll on a lot of people, both the young and the not so young. This is triggering an overall reduction in self-confidence and an increase in the feeling of dissatisfaction; social media has played its part in spreading health concerns in the Middle East as well. Cases of eating disorders have risen sharply in the past ten years, and it turns out that the most affected individuals are young teenagers. But what exactly is an eating disorder, and what does it entail?

An eating disorder occurs when a person experiences disturbances in their eating patterns, as well as their thoughts and emotions related to food. An individual with an eating disorder will typically be preoccupied with one's body image and alter their diets excessively in an attempt to change their physical appearance. It is a mental illness marked by distress about eating and an obsession with body weight.

This disorder is characterised by weight loss, having a distorted body image, and the inability to maintain an appropriate weight in relation to age, height, stature. Anorexic people typically restrict the number of calories ingested and the kinds of foods that they eat. You can spot anorexia in your family member when the following symptoms or behaviour patterns appear:

Bulimia, unlike anorexia, is harder to spot, as there is little to no weight loss symptom. Patients with bulimia suffer from episodes where they binge-eat or eat fast, and they barely chew or savour the food's flavour. These binges are only stopped when interrupted by an external factor, or when their stomachs hurt due to excessive intake in a short time. Once a binge is over, the patient will feel an overwhelming sense of guilt. This causes them to induce vomiting or use an enema or diuretic to expel the food they have just eaten.

This cycle can last several days. Look out for these signs if you suspect someone is suffering from bulimia:

Though there are quite a few similarities between binge-eating and bulimia, there are some distinct ways to tell them apart. For one, a binge eater will not purge or throw up, whereas a bulimic patient will instantly empty the contents of their stomach.

People struggling with binge-eating will eat abnormal amounts of food, often in isolation to avoid embarrassment. They do feel an immense sense of shame and low self-esteem soon after, but they are unable to stop such episodes. Binge-eating will mostly result in obesity, high cholesterol and high blood pressure.

In 2017, the Department of Health Sciences, College of Natural Health Sciences, Zayed University, conducted a study on 315 female students aged 14 - 19 in Ajman, UAE. It was discovered that approximately 36% of the students ran a risk of suffering from eating disorders. Further analysis revealed that 20.3% of them had binge eating disorder symptoms; 4.8% showed signs of bulimia, while 5.4% were at risk of being anorexic. It shouldn't be a surprise to us that 49.1% of the teenage girls in the study who were clearly underweight perceived their body image to be normal.

A survey conducted in 2012 at the Al Ain University reported that 1.8% of 900 girls in their teenage years were anorexic. The demographics suggest females to be the more prominent gender who struggle with eating disorders. Ages 15 - 25 years are the most affected age groups, but alarmingly, there is an increase in younger patients as well.

This health concern does not spare men. They may go unnoticed in afflicted men since body image and weight issues are stigmatised to be 'female problems'. If you know of any male member of your family or in your circle of friends who are suffering from an ED, please let them know that they are not alone in dealing with it.

The main determinants that aggravate the risk of eating disorders are:

Experts warn that eating disorders are serious and potentially life-threatening. Most of the patients delay treatment because they deny admitting that they need help or admit it too late.

Early detection and early diagnosis can help to a great extent in achieving a more favourable outcome. Anyone who goes even five years struggling with any of these disorders with no treatment may suffer from more serious and lasting chronic illnesses. Therefore, there is a need for families to be aware of any red flags that may be a sign of a loved one needing help.

Some important Do's and Don'ts that carers, parents, friends or even siblings can keep in mind are:

There are programs and talks being held in the UAE to emphasise on the importance of healthier dietary habits, especially among Emirati teenagers. Skilled specialists in the UAE provide in-depth treatment plans to address nutrition, therapy and medications tailor-made to suit every individual case of eating disorder.

Let us be more open and accepting of this growing health concern. It is important that we become aware of this mental affliction even though we may not be the ones suffering. Assure your young siblings and children that they don't have to fulfil some unreal expectations of being 'perfect'. As long as they are thriving and happy, they are perfect.

Back to Basics: Practical Ways to Improve...

How to Convert Money in Your Mind...