Held under the patronage of His Highness Sheikh Mansour bin Zayed Al Nahyan, Deputy Prime Minister and Minister of the Presidential Court, the first edition of the Global Media Congress will kick off next week, with international participation and massive global attendance by leaders, intellectual pioneers, experts, and specialists in the media sector from around the world.

The Congress, organised by ADNEC Group in partnership with Emirates News Agency (WAM), will see an exhibition and specialised conference specialising in the media industry sector, and it provides opportunities for various media institutions to discuss partnerships and ways of cooperation in promoting mechanisms for developing civilised and humane media aimed at serving humanity, ensuring its happiness, and developing societies through solid, reliable, and highly credible content.

The Global Media Congress will see participation from more than 1,200 media sector pioneers, specialists, and influencers from 6 continents in the globe, with more than 30 debates and workshops with the participation of more than 162 globally renowned speakers. 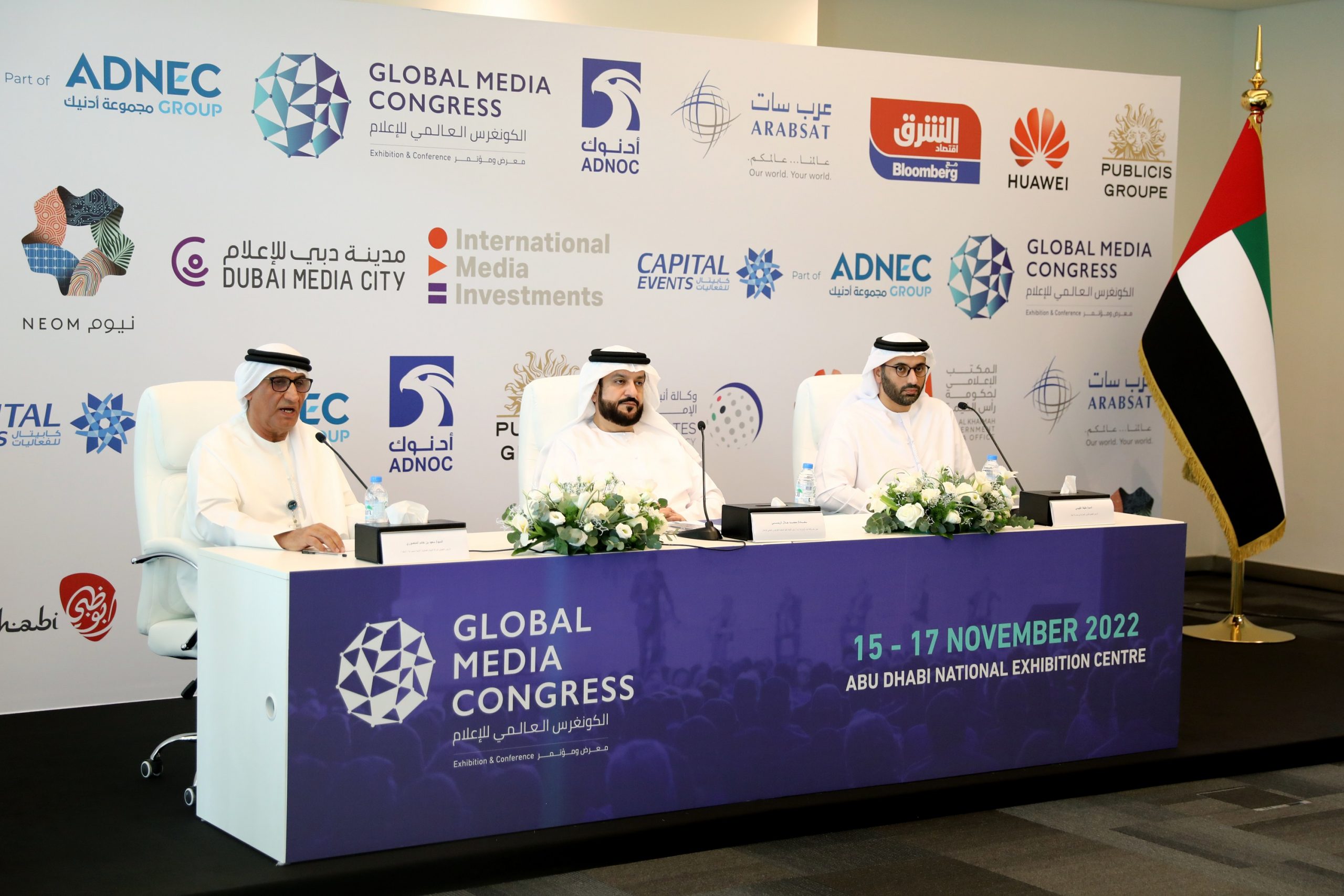 In addition, the exhibition will host more than 170 prominent media establishments and companies from 29 countries worldwide. They will showcase the latest international technologies specialised in these vital sectors and will include the organisation of a number of accompanying events that are being held for the first time in the Middle East, including the first session of the World Media Congress. One includes the Global Buyers Program, which brings together more than 170 buyers from all over the world to provide an exceptional platform that brings together the most prominent buyers and suppliers from all over the world to showcase the best technologies, services, and knowledge in the media sector.

The Congress will also witness six major initiatives: the Live Shows Platform, the Global Program to Empower Young Media, the Future Media Lab, the Innovation Platform, and the Global Buyers Program, as well as a special session on the role of the media in consolidating a culture of tolerance in human societies.

Speakers also include Wayne Berg, CEO of Digital Media, Culture and Fashion of Saudi Arabia's Neom city; Adrian Monk, Director General and Head of Public and Social Engagement at the World Economic Forum in Switzerland; Dr Paolo Ruffini, Dean of the Vatican's Department of Communications; Masoud Sherif Mahmoud, CEO of the Emirates Etisalat Group; and Caroline Farag, Vice President of CNN and Editor-in-Chief of CNN Arabic from the UAE.

The Global Media Congress will also host several meetings and forums for the major participating media establishments, including a forum titled National Media in the Age of Digitisation, organised by Al Ittihad newspaper, with the participation of a group of media professionals and researchers specialised in media issues.

With numerous business lines, we are proud to be a leading group that contributes to the sustainable growth of Abu Dhabi's tourism industry. Our mission is to bring business and leisure travellers together to create socioeconomic impact for Abu Dhabi and our wider portfolio of destinations, he further commented.

With over 150 brands specialised in the media and production industry participating, the Congress is a world-class stage where buyers and sellers can meet, learn, network, do business, and explore new products, solutions, and technologies, providing an unmissable opportunity to take a great leap forward in the regions and the globes media sector.

Taking place from November 15 to 17, 2022, the Global Media Congress, organised by ADNEC Group in partnership with Emirates News Agency (WAM), will see an exhibition and specialised conference that focuses on the latest developments in and future of the media sector. The event provides opportunities for various media institutions to discuss partnerships and collaborative ventures that will bolster the development of the media sector, ensuring its long-term sustainability and the continued provision of solid, reliable and highly credible content.

As part of the event's agenda, the Global Media Congress will host a conference, which is the first-of-its-kind in the Middle East, under the theme Shaping the Future of the Media Industry. The three-day conference will see in-depth discussions aimed at uniting the entire media sector to exchange ground-breaking ideas and cutting-edge solutions shaping the future of the industry. It will also provide a unique platform to highlight the position of mass media in the Middle East whilst engaging a global audience, driving innovative visions and collaborations that will advance the sector.

JOIN THE ‘ONE BILLION STEPS CHALLENGE’