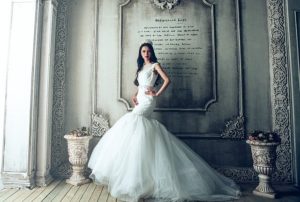 While wedding dress styles see seasonal changes, the timeless, ubiquitous shade of white has always been associated with marriage and bridal vows. In fact, the majority considers the tradition of walking down the aisle wearing a white dress to be as old as the concept of matrimony itself. Contrary to popular belief, tracing the history of this tradition reveals otherwise: white didn’t become the popular colour of choice for brides until the mid-19th century.

But why white? What does white actually represent other than what the general public is led to believe?

Before The Mid-19th Century

In the early days of the 19th century, white for a bride was not only seen as non-traditional, but quite an unusual choice for a wedding. With that in mind, brides weren’t supposed to pick anything they won’t wear again. Instead, they wore their fanciest of dresses, and were expected to repeat them, even if it meant donning their best black dress, which the lower classes often practised.

White posed to be a financially unfit option for the brides-to-be, since it isn’t and wasn’t the easiest of colours to care for, but the concept that a wedding dress was meant to be worn only once didn’t sit well with the community. There was freedom of choice in fabrics, embellishments and colours, unlike the strict rules followed today not only in regards to wearing white but all the sartorial decisions associated with it.

Royal weddings and marriages between the circles of prominent figures garner a lot of coverage, even more so than today. The smallest details were the biggest matters for the publicists as much as for the common people, considering that in those times, people led hushed lives, and a famous event was all it took to cause a stir.

On February 10, 1840, Queen Victoria married her cousin Prince Albert of Saxe-Coburg and Gotha: a historical wedding that led to the big boom in the white wedding dress trend. Queen Victoria wore a wedding dress crafted in white Honiton lace and chose a flower crown in place of a tiara for a more realistic approach.

White on a bride symbolises purity and virginity as popular belief has it, but that wasn’t the reason behind Queen Victoria’s intention to garb in white. She wore white to support and boost the declining demand for handmade Honiton lace owing to the rise of the factory-made textiles in the industrial revolution. 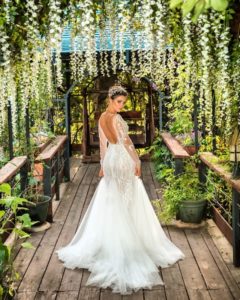 Part of this virginity and purity concept is mainly influenced by some biblical occasions and the Victorian Era. A lot has to do with newspapers, magazines and well-known publications of that time. They made a big fuss over the notion of brides wearing white and cemented the idea that white always has been ideal for brides because of the chastity and innocence it highlights. There was more to wearing white other than the virginity of the bride.

In simple words, white represented wealth in its purest form. In the olden days, the norm was to exchange vows in anything good the bride owned, no matter how rich or how poor. Setting a theme to the precious event of nuptials makes that only the leisure class could afford a white dress and the maintenance it required to preserve its snowy hue. Which, middle and lower classes even if they tried, couldn’t manage to afford.

While the truth rests on the fact that Queen Victoria was the trendsetting monarch of the white wedding dress, we also discussed the burning concerns of the working classes of the society regarding this whole white view. It wasn’t until the Second World War that the middle classes took the wealthy and their prosperous concepts seriously, which included the white wedding dress, obviously thanks to the end of the war and the increasing prosperity.

Times changed and meeting the expense of a white wedding dress which is only worn for a day wasn’t the issue anymore. Plus, the upcoming theatre and media industry showcasing brides in movies and stage, shows concluding a fairy-tale end to a happily-ever-after matrimony dressed in dreamy white, didn’t leave any stones unturned to solidify that white and bride, equalled in unyielding pride, giving light to this deep-rooted tradition. 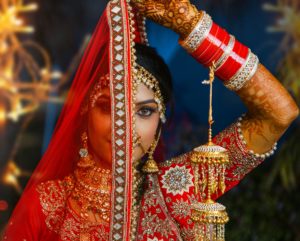 A white wedding dress quickly became the main part of a wedding for various cultures, but when we discuss its history, you must know we’re referring to the Western and the European cultures. In Eastern cultures, wearing white in weddings is seen as unlucky; hence, brides from these cultures showcase varied colour bridal ensembles, with red being the most popular choice. India, Pakistan, China, Vietnam and some other Asian countries go for red bridal dresses.

What’s The Harm In Going With The Flow?

Wearing white on your wedding is perfectly acceptable; conversely, there is no pressure on any woman to wear white alone, especially if she wishes to don herself in something different for her wedding or simply cannot afford the former. Nothing should hold a bride from experimenting with different colours and picking a non-white hue! Find a wedding dress that suits your personality and style. After all, history knows that brides of the past didn’t hesitate to dress however they liked.