MICHELIN presented its first selection of 42 restaurants in the capital as part of the MICHELIN Guide Abu Dhabi. Three Abu Dhabi restaurants were also recognised with one MICHELIN Star for their high-quality cooking, and four establishments received a Bib Gourmand for offering good food at moderate prices. 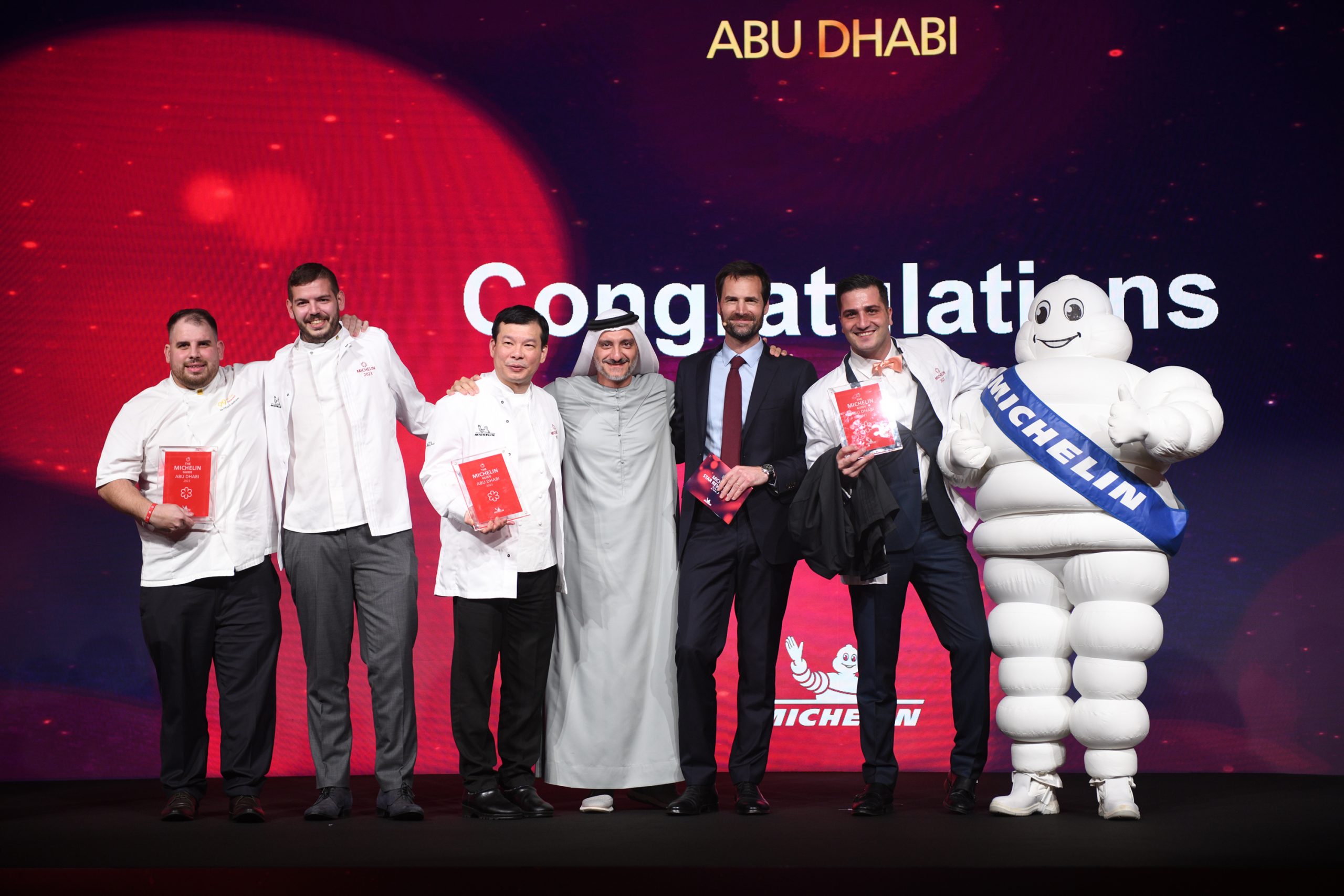 Amongst the 42 restaurants recognised in the inaugural edition of the MICHELIN Guide Abu Dhabi, one MICHELIN Star is awarded to Talea by Antonio Guida for pleasing diners with its "Cucina di Famiglia" or family-style Italian cuisine; Hakkasan, a restaurant celebrating traditional Cantonese flavours; and contemporary Japanese restaurant 99 Sushi Bar.

"The wonderful diversity of the cuisine proposed by these three restaurants perfectly illustrates the curiosity of local gourmets, as well as how Abu Dhabi welcomes international cultures to make them shine at their best level", said Gwendal Poullennec, International Director of the MICHELIN Guide

"This first MICHELIN Guide, Abu Dhabi selection, is the beginning of a long journey for a city with unlimited gastronomic potential. Our inspectors discovered a rich variety of cuisines offered in Abu Dhabi, from creative dishes conceived by some of the world's most renowned chefs to traditional cuisines of the region: Middle Eastern, Lebanese and, of course, Emirati",

Abu Dhabi, the capital and largest Emirate of the United Arab Emirates, is a melting pot of cuisines and cultures. A dynamic centre for sports, art and cultural exchanges, the city is emerging as a gastronomic hotspot known for its rich yet diverse culinary scene, from local Emirati eateries to luxury dining rooms. 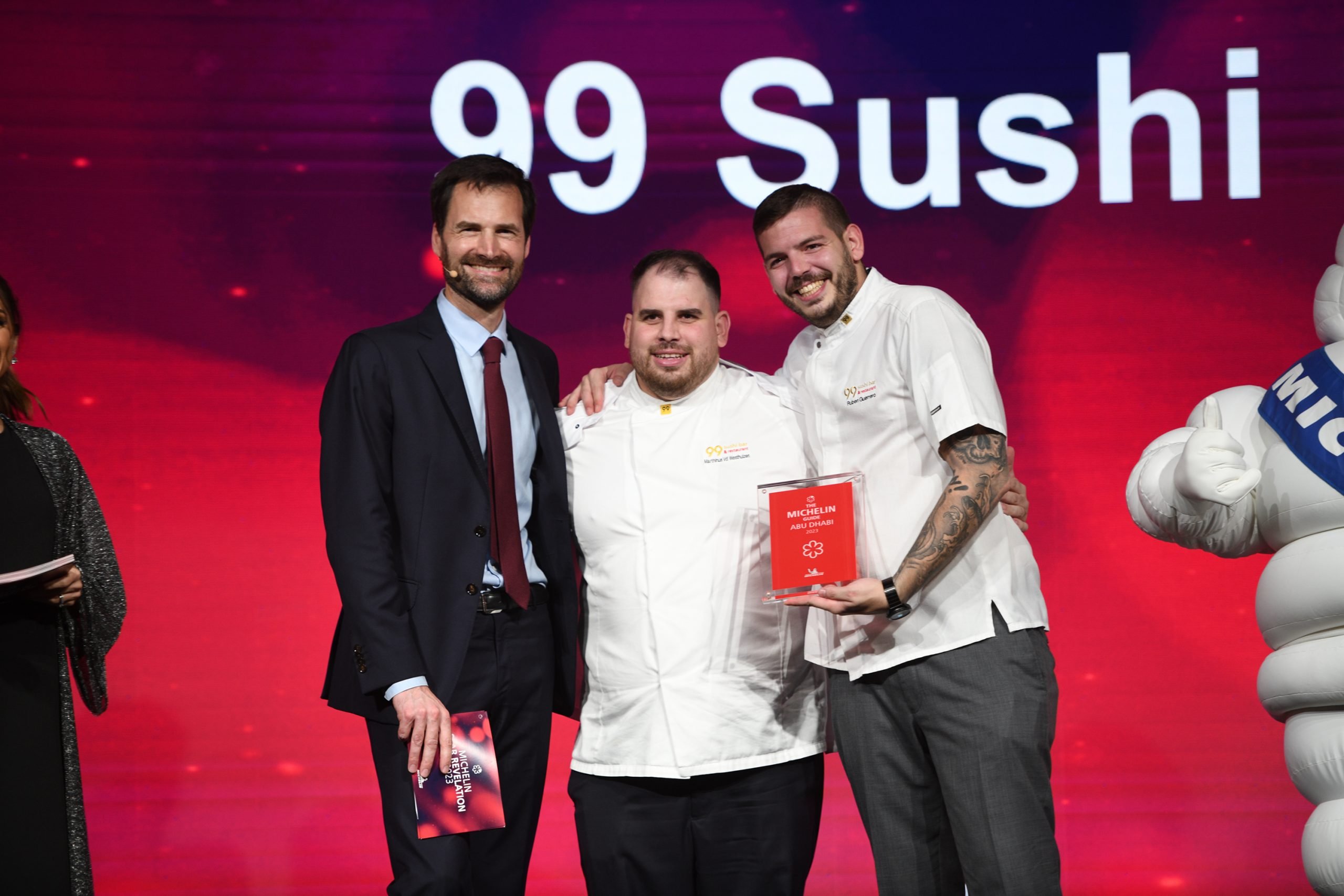 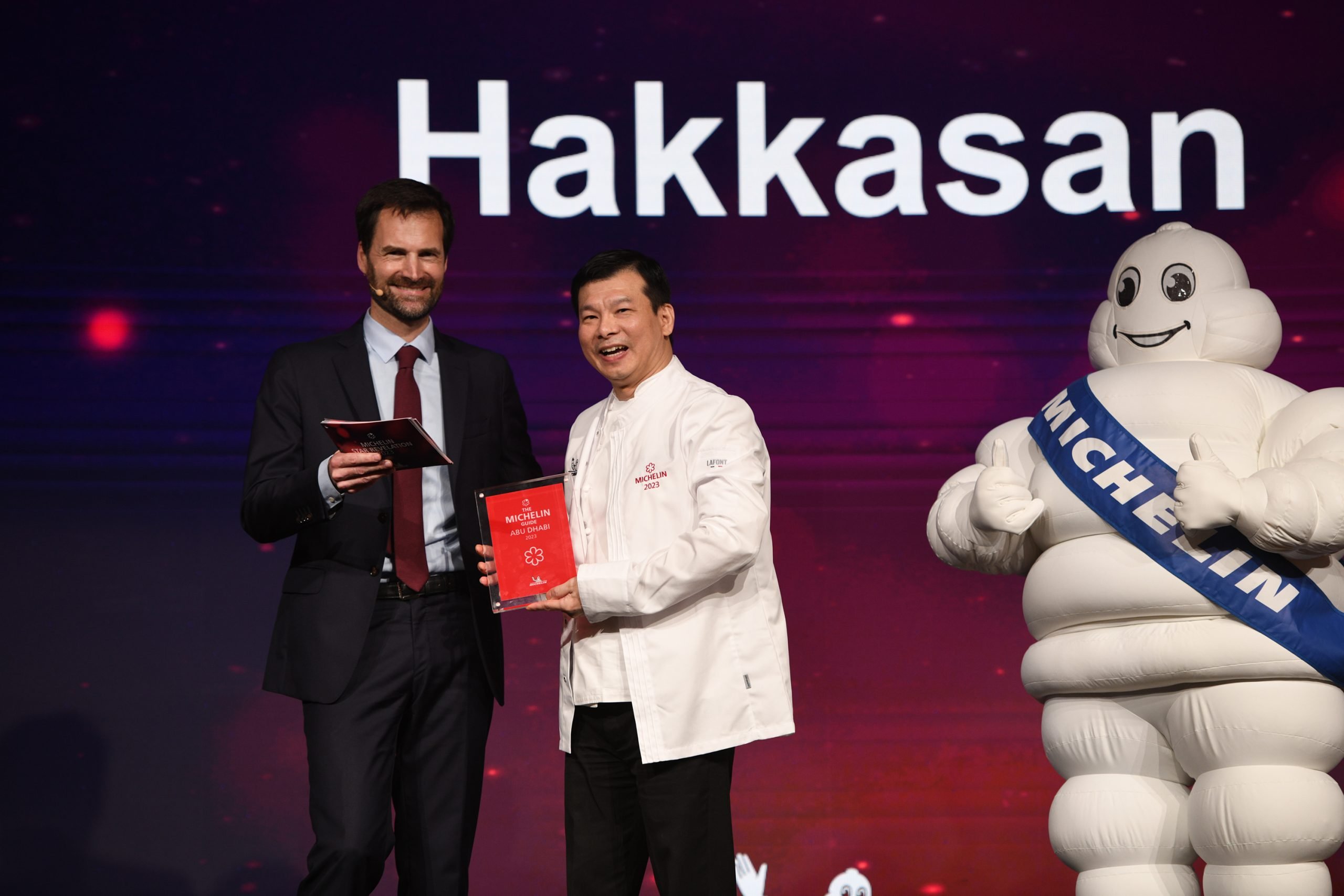 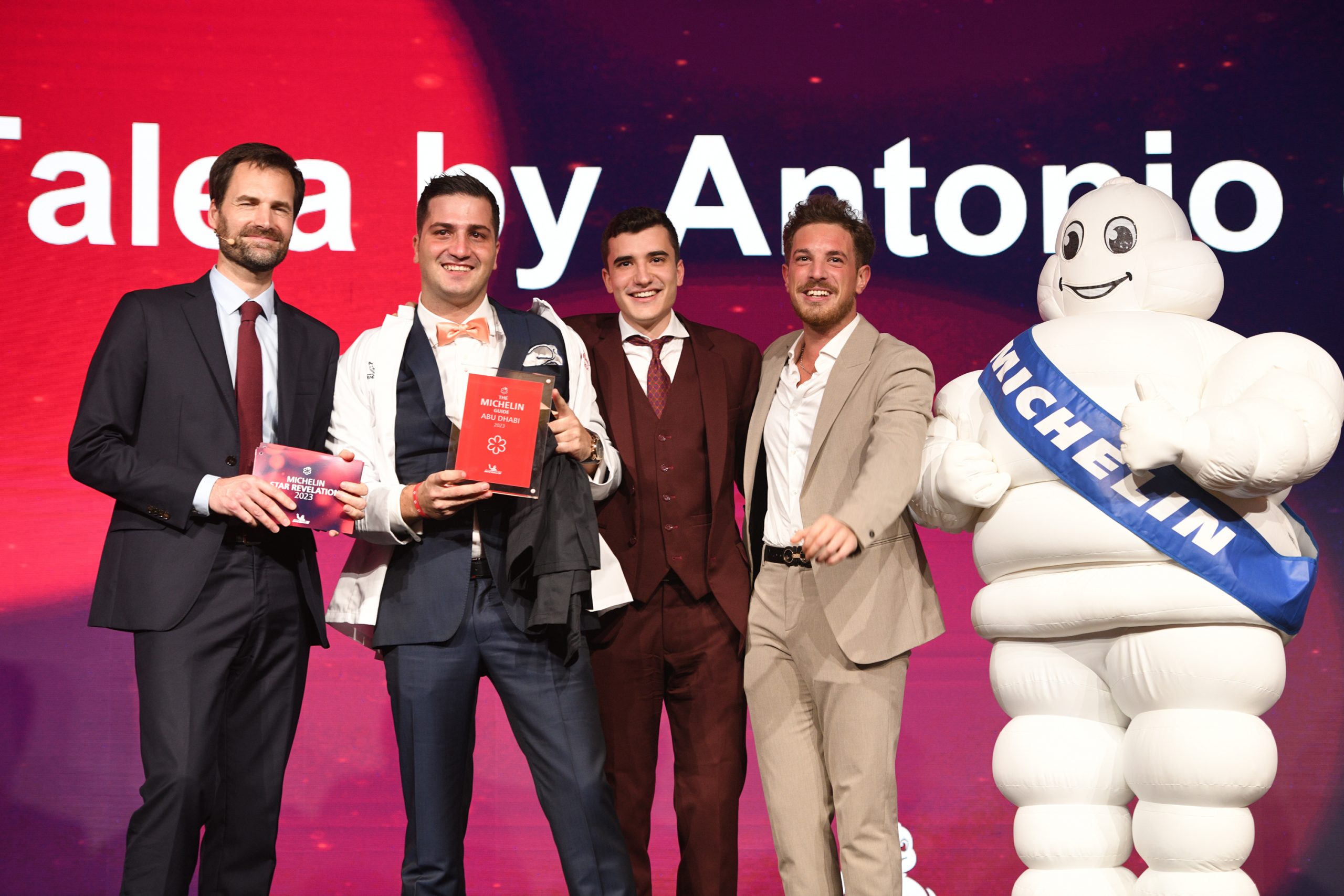 99 Sushi Bar receives one MICHELIN Star for its beautifully presented dishes, full of finesse and precision. This chic Japanese restaurant's primary goal is to underline the quality of its ingredients, with contemporary touches done with subtlety and care. Its Spanish owners import most of the seafood from their native country; the red shrimp is particularly noteworthy. It all runs as smoothly as silk and is the ideal venue for an intimate dining experience.

Hakkasan's Abu Dhabi outpost is instantly recognisable, thanks to its sultry and chic oriental décor. Located within the Emirates Palace hotel, this Cantonese cuisine-led restaurant adds another MICHELIN Star to the brand by offering customers time-honoured classics such as Peking duck or Chilean sea bass with honey, as well as their celebrated dim sum prepared with enormous skill.

Talea by Antonio Guida has been awarded one MICHELIN Star for its understated Italian sophistication. Overseen by chef Antonio Guida who made and cemented his reputation in Milan, Restaurant Talea celebrates "Cucina di Famiglia" or family-style cooking, offering guests simple but exhilarating flavours. Purity and vibrancy are evident in sublime dishes such as Maccheroncelli alla Genovese, turbot with Mediterranean Guazzetto and tiramisu that's made right in front of customers.

Almayass gets a nod from the MICHELIN Guide inspectors for its Lebanese and Armenian influences. The original branch was founded in Beirut in 1996, and this large Abu Dhabi branch, where the circular booths are the prized seats, continues the tradition of offering an extensive and appealing menu of richly flavoured and carefully prepared dishes.

Beirut Sur Mer is about enjoying Lebanese food by the sea. This restaurant has been awarded a Bib Gourmand for its classics ranging from mezze to Mashawi. Portions here are generous, and prices are reasonable. The large colourful, and contemporary dining room also boasts a beautiful beachfront terrace. It's an ideal spot for post-cultural refuelling after visiting the nearby Louvre Abu Dhabi.

Otoro receives a MICHELIN Guide Bib Gourmand for its take on contemporary Japanese cuisine, with signature dishes such as yellowtail carpaccio, tuna tartare with yuzu dressing and titular otoro nigiri, just to name a few. It's a large, relaxed space with a funky feel.

Tazal's Mediterranean food, with its exhilarating infusion of European influences and Arabic touches, is also awarded a Bib Gourmand. Dishes such as Tanja short ribs and Zaatar sea bream are as delicious as they are originally.

Our inspectors received a warm welcome when dining here. The service that accompanied their dinner progressed in the same vein, with the entire team professional and genuine in their hospitality: perfectly attentive yet relaxed and happy to engage. Whilst the cooking and views are impressive, the level of service is the final part of the jigsaw that makes dining at Li Beirut such a pleasure.

A real personality in this buzzy restaurant, Marlon oversees the extensive and meticulously curated selection of both wines and sake. Originally from the Philippines, he has changed 90% of the wine list within his first year and continues to engage customers with his charming smile.

It might be Antonio Guida's name on the door, but he has chosen one of his finest protégés to head up this beautiful newcomer to the Abu Dhabi dining scene. With a laundry list of impressive names on his CV, such as Don Alfonso, Quattro Passi and Seta, Luigi was a natural for this position. His eye for detail, impeccable style, generous approach and natural confidence also shine through in the family-style dishes, which are packed with flavour.

IKEA will make the turkey for Thanksgiving and...

Here are 4 Reasons to Visit The London...

Starbucks Pumpkin Spice Latte is Back in UAE...

SUBLIMOTION IS BACK AT MANDARIN ORIENTAL JUMEIRA, DUBAI

Food test! Are you eating a science...

Starbucks Pumpkin Spice Latte is Back in...