UFC® returns to Abu Dhabi on October 22 as Charles Oliveira takes on Islam Makhachev for the vacant lightweight championship at Etihad Arena on Yas Island.

UFC® 280: OLIVEIRA vs MAKHACHEV will be the latest event held in the UAE capital as part of a landmark partnership between the world's premier mixed martial arts organisation and the Department of Culture and Tourism - Abu Dhabi (DCT Abu Dhabi), which began in 2019.

October will also see the return of Abu Dhabi Showdown Week, running from October 17 -23, anchored by UFC 280 and consisting of other sports and entertainment ancillary events powered by Flash Entertainment. 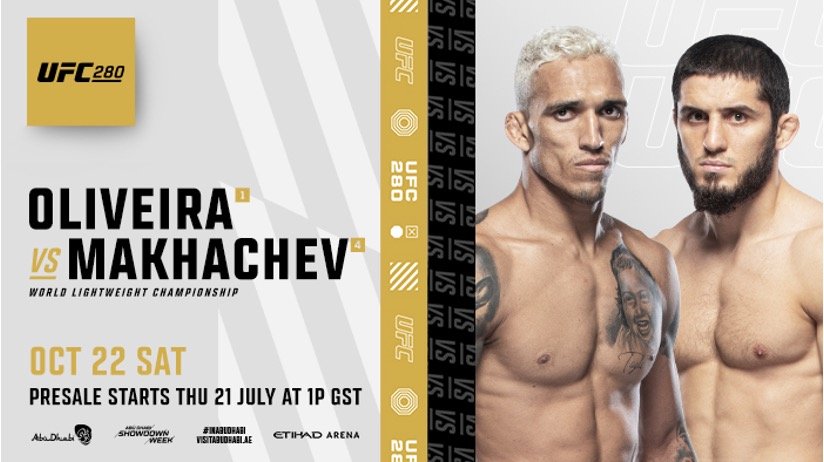 UFC® 280: OLIVEIRA vs MAKHACHEV tickets go on general sale at 1 p.m. GST (Gulf Standard Time) on Friday, July 22, via Etihad Arena and Ticketmaster. UFC Fight Club® members can purchase tickets early Thursday, July 20, at noon GST. Those who registered their interest in the event will gain access at 1 p.m. GST.

Oliveira (33-8-1, fighting out of Sao Paolo, Brazil) will be looking to regain the vacant title after his recent dominant victory over Justin Gaethje. The Brazilian became champion with a second-round stoppage of Michael Chandler in May 2021 before defending successfully against Dustin Poirier seven months later. Due to Oliveira's missing weight, only Gaethje was eligible to take the title when the two met in May this year. Despite this, Oliveira secured a first-round submission win to cement his place at the head of the division's rankings, extending UFC records for most finishes (19) and most submissions (16) in the process. His sights will be firmly set on taking back the title in Abu Dhabi.

Makhachev (22-1, fighting out of Makhachkala, Dagestan) is already a crowd favourite in Abu Dhabi, following bouts with Davy Ramos and Dan Hooker, in the UAE capital, in 2019 and 2021, respectively. A product of the famed Nurmagomedov team, Makhachev is on a 10-fight win streak, having stopped Bobby Green in the opening round of his last outing. A gifted ground fighter, Makhachev has ten submission wins during his MMA career and will be looking to add Oliveira's name to his winning streak by claiming the lightweight title in front of what will effectively be a 'home' crowd in Abu Dhabi.

Also on the card, No. 5 ranked UFC welterweight contender Belal Muhammad aims to defend his spot in the rankings against fast-rising No. 9 ranked Sean Brady. Muhammad is currently on the best run of his UFC career, being unbeaten in his last eight fights, including notable victories over Vicente Luque, Stephen Thompson and Demian Maia. He now looks to add another statement performance to his resume and stake his claim for a shot at the title. Undefeated prospect Brady plans to continue his momentum from wins over Michael Chiesa, Jake Matthews and Christian Aguilera and break into the Top 5 for the first time. He now intends to put his Brazilian Jiu-Jitsu black belt skills to the test and become the first man to submit Muhammad.

Visit UFC.com for information and content to support your UFC coverage. All bouts are live and subject to change.